Hercules unveils the DJ Console 4-Mx, the latest version of their DJ Console line, which features a large touch-sensitive, jog wheel, a built-in audio interface and intuitive control over 2 and 4 virtual decks.

The suitable for mobile DJs Console 4-Mx has steel and aluminium crafted body with dimensions of 15.75″ x 9.8″ and 3 clearly distinct sections which reproduce a set of 3 separate mixing devices: 2 decks and 1 mixing console, distinguished by color (grey/black), feel (brushed/lacquered) and material (aluminum/steel). The console provides enough space for a wide variety of controls including 89 controls in 2-deck mode and 150 controls in 4-deck mode. 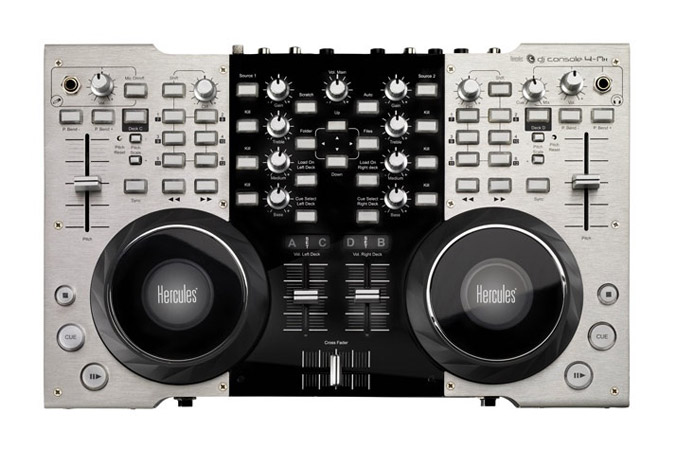 The two large jog wheels(4.7-inch in diameter x ¾-inch in height) have been designed for scratching with similar dimensions to CD players. The wheel’s Detection Sensors featuring an integrated technology that detect the weight of the user’s hand on the jog wheel tops and that cause them to depress by less than 1mm, like on some CD players, or the felt mat on vinyl turntable. This mechanical type of detection in the controller works under all conditions and eliminates the kind of interference that can disturb electrical detection-like static electricity, or by lighting truss systems, carpeting or shoes which electrically insulate the DJ. 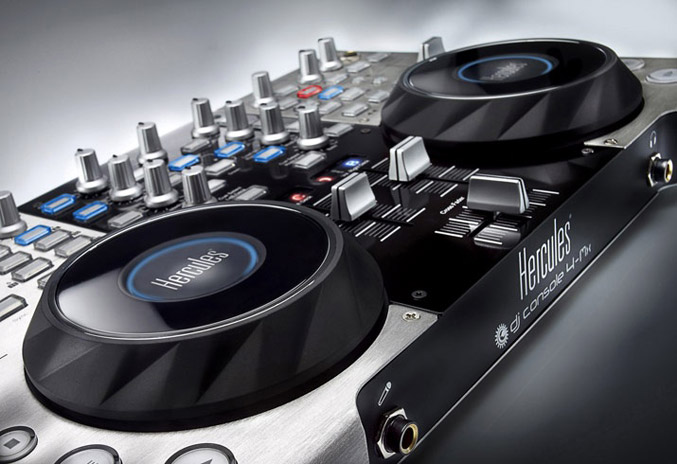 In the center of each jog wheel, have a backlit Indicator, that indicates the activation of  Touch Wheel mode, which lets the user scratch, or stop/restart music playback by simply changing their hand’s pressure, while the External Ring made from non-slip texture gives additional control.

The new Hercules DJ console comes also bundled with Atomix Productions’ VirtualDJ7 LE 4-Mx DJing software , allowing for mixing on up to 4 virtual decks on both PC and Mac. It will be available from November 22, 2010. at an SRP of $449.99.