As the first installment of its 2009 product line-up, Onkyo has introduced three new home theater receivers, including the world’s first to offer Dolby’s new ProLogic IIz processing, which can produce sound effects above the listener’s head.

Theses models, which range in price from $299 to $599, also include an array of advanced HD audio and video technologies from Onkyo, Dolby, DTS, Audyssey, Faroudja, and others that were previously only available at higher price points. The TX-SR607 features six HDMI inputs, and is the first AV receiver with a front-panel HDMI input.

With the debut of the new TX-SR607 receiver, Onkyo also has the distinction of becoming the world’s first manufacturer to launch a 7.2-channel home cinema receiver featuring the all-new Dolby Pro-Logic IIz mode. Designed to take home cinema sound to new heights (literally!) DPL IIz introduces a vertical aspect to the sound field through the addition of left and right-channel front height speakers mounted above the main speakers. Based on the initial positive reactions to demonstrations of this technology to dealers, Onkyo anticipates good demand for expanded height channel capabilities in future models.

“We are very excited to be the first audio manufacturer to utilize this exciting new surround format from Dolby,” comments Onkyo USA marketing manager Paul Wasek. “It adds a new realm of audience involvement in three dimensions, with surprise aircraft flyovers triggering the ‘duck’ reflex. Onkyo has launched this technology on our most popular AV receiver, rather than our most expensive, in order to reach out to a much larger customer base. The company’s premium receiver lineup, which will roll out over the Summer, will include expanded height-channel capabilities, internet radio and network audio technologies at lower price points.

These new models are well equipped for Blu-ray and other HD audio and video source components, with HDMI repeaters plus Dolby True HD and DTS-HD Master Audio processing in the TX-SR607 and TX-SR507. The entry-level TX-SR307 has HDMI pass-through switching on three inputs, while all three models support 1080p, Deep Color, and x.v.Color.

Onkyo has also developed four new exclusive gaming modes designed to enhance the listener’s experience when using video game systems. Players can select from Rock, Sports, Action, or Role Playing game modes to match the gaming content. These new modes will immerse all the players in the action like never before.

The Onkyo TX-SR607 and TX-SR507 are the first to use the company’s new proprietary rear-panel universal port, which simplifies the connection for Onkyo’s forthcoming HD Radio Tuner and iPod Dock that will be available in late spring. The 5.1-channel TX-SR307 and TX-SR507 have 65- and 80-watts per channel amplifiers respectively, while the 7.2-channel TX-SR607 is rated at 90 watts per channel, has dual subwoofer line-outputs, upconverts all analog sources to HDMI via Faroujda DCDi technology and is Sirius Satellite Radio ready.

The Onkyo TX-SR307 and TX-SR507 will be available in March, and the TX-SR607 in April with suggested retail prices of $299, $399, and $599 respectively.Onkyo, which takes its name from the Japanese “On” meaning ‘sound’ and “Kyo” meaning ‘harmony,’ has been producing precision audio components for over a half-century.

The company’s philosophy is to deliver products that are superbly designed and built to a consistently outstanding standard of excellence. Today, Onkyo is at the forefront of the home theater and digital revolutions. For more information about this and other fine Onkyo products, visit www.onkyousa.com or call 800-229-1687. 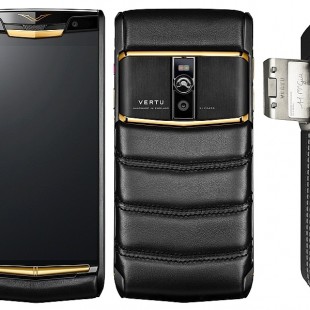 The smartphone maker Vertu, which is known for making luxurious smartphones, has released a new version of its high-end Signature Touch smartphone. The new handset comes with a Class 5 titanium chassis, a display that is covered by a sapphire glass cover and special leather for the back that...

GlacialTech announced four new notebook coolers to help you fight against heat. The new S1, M1, Z1 and L1 models belong to new M-Flip series and are suitable for up from 7” to 17-inch laptops. The new notebook "refrigerators" utilize GlacialTech's patent-pending Air Flow Wing design for...