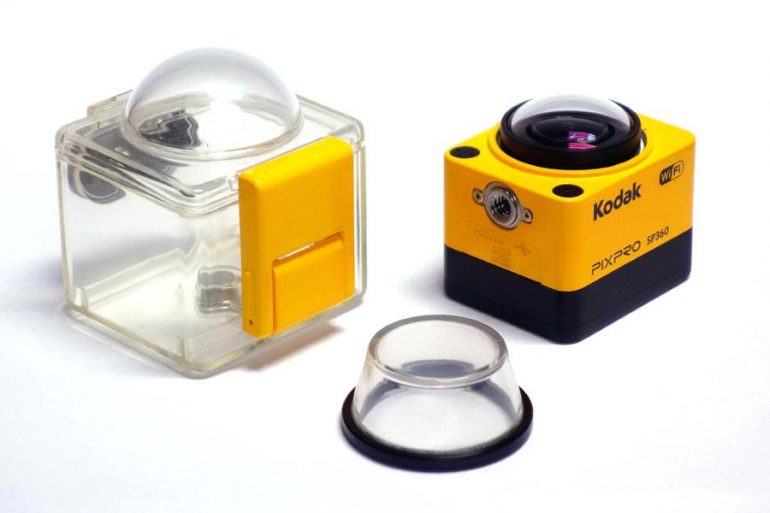 The US camera maker Kodak has presented its latest action-oriented camera – the PixPro SP360. Designed for people who lead an active life and want to take pictures anywhere, the new camera comes with all the features and functions that you would expect from such a device as well as resistance to shock, extreme temperatures, dirt and water.

The new camera looks like a small-sized cube and measures 41.1 x 50 x 38 mm for total weight of just 103 grams. The small size and low weight do not prevent the camera from offering IP6X and IP5X certifications, which make it dirt- and water-resistant. The camera can also survive drops from up to 2 meters and works at temperatures as low as -10 degrees Celsius.

The device is based on a 16 MP CMOS sensor and offers an extreme 360-degree viewing range thanks to the included ultra-wide F2.8 lens, video recording of MP4 1080p video at 30 FPS or 720p video at 60 FPS, 10 MP stills, 10 MP JPEG files at up to 10 FPS in burst shooting mode and more. The camera has five available modes to choose among – 360 degrees Panorama, Front at 212 degrees, Split at 180 degrees front and rear views at the same time, Dome at 214 degrees and Ring/Sphere at 360 degrees. There’s also built-in Wi-Fi to easily transfer pictures and remotely control the camera via the PixPro Remote Viewer app for Android and iOS, NFC, a microSD/microSDHC card slot (up to 32 GB) and an internal battery that has enough power for up to 350 shots or 160 minutes of 1080p video.