Kodak’s press release for CES 2009 (Consumer Electronics Show) appears to have leaked out onto the web a few days early, revealing a number of interesting items to be introduced by Kodak in the coming days.

Kodak has introduced two new point and shoot cameras and one pocket-sized HD video camera.  The Kodak Z980 is a 12 megapixel sensor and a whopping 24x optical zoom.  Of course, the Z980 also offers much needed image stabilization for its extended focal length.  This spec-heavy superzoom will run $399 retail when it releases.

The Kodak Zx1 is a competitor to the Flip-series cameras (Read Photography Bay’s Flip MinoHD Review).  The Zx1 features 720p capture at 60fps.  Like the Flip cameras, the Zx1 includes software to enable easy uploads to YouTube.  It is also SD card compatible for sizes up 32GB, which will result in recording times up to 10 hours.  If its performance lives up to its specs, the Zx1 will be a bargain at $149.95. 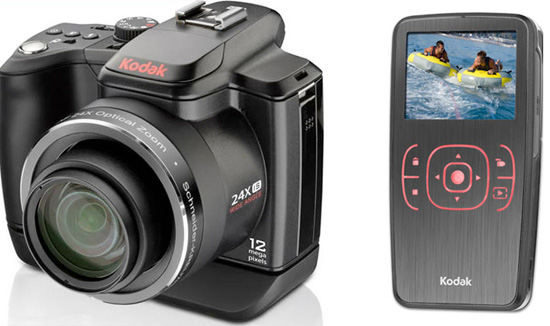 Las Vegas, NV, January 8, 2009 – Eastman Kodak Company (NYSE:EK) today introduced new products and services that make it easier than ever for consumers to make the most of life’s moments, from go-anywhere High Definition video recording to simple, automatic capture of brilliant images.

“These new products deliver great performance but are still so easy to use that you’ll never miss a memorable or important moment,” said John Blake, General Manager Digital Capture and Devices, Vice President, Eastman Kodak Company. “With these new products consumers can count on Kodak to help them capture brilliant images and video, easily share them with friends and family, and create a wealth of lasting memories.” 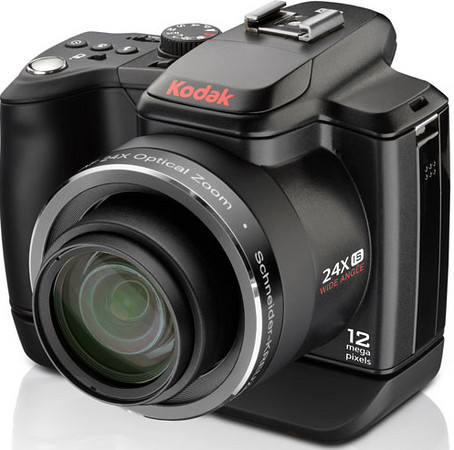 “Photographers looking for more from their digital camera will find it in the Z980,” Blake said. “Our innovative Smart Capture feature makes camera adjustments automatically, delivering brilliant images automatically in virtually any setting.”

Kodak also introduced new models to its M-Series Digital Camera line, led by the KODAK EASYSHARE M380 Digital Camera. A sleek but powerful digital camera for style-savvy consumers, the M380 delivers an innovative feature package led by Kodak’s Smart Capture feature. The new camera’s compact design also boasts a 10MP sensor, 5X optical zoom, and 2.7″ LCD. The M380 will be available in black, red and teal, and retail at US$179 MSRP from March, 2009;

The Zx1 allows users to shoot and share high-quality video quickly and simply, with 720p HD video capture – at 60 or 30 fps – a vibrant 2.0-inch LCD screen, and built-in software for easy editing and sharing of content to YouTube™ and other social media and networking websites.

“The Zx1 is a fun and interactive way to engage in ‘on-the-go’ storytelling, and enables consumers to quickly and easily share their adventures online,” said Blake.

The KODAK Zx1 Pocket Video Camera will be available from Spring 2009, and retail for US$149.95 MSRP.

About Kodak
As the world’s foremost imaging innovator, Kodak helps consumers, businesses, and creative professionals unleash the power of pictures and printing to enrich their lives.

Sony Professional Europe today confirmed that it has been selected by BSkyB (Sky) and Telegenic to design and build one of the world’s first 3D Outside Broadcast (OB) trucks, due for delivery in April 2010. Sky, Telegenic and Sony have been working together to develop a next generation outside...

Hewlett-Pacard launched a special laptop for women under the name HP Mini 1000 Vivienne Tam Edition. The model was developed in cooperation with the designer Vivienne Tam. Laptop is bright red in color and looks like a small bag - images that are on it symbolize success and prosperity. The...