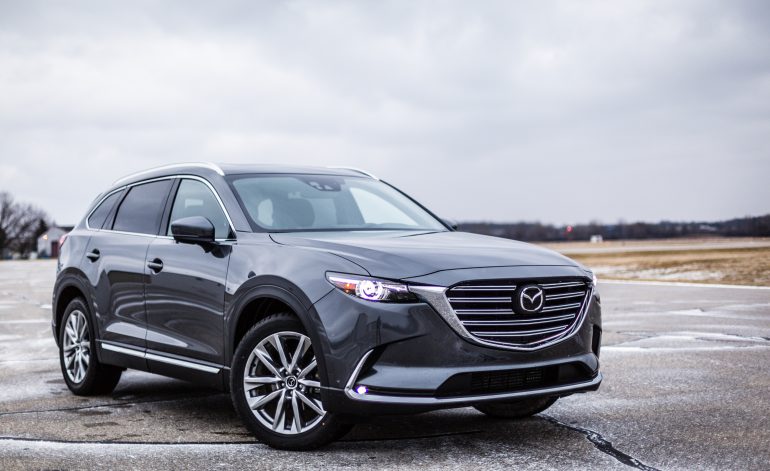 Also on the Grand Touring you’re going to find the front parking sensors. That’s something new for the 2018 model, and the fog lights. Those are LED fog lights so they’re small but they’re very bright.

You may have heard in the news recently that some manufacturers have poor quality headlights.

Mazda is bucking that trend by putting standard LED headlights across their entire lineup. The Touring and Grand Touring trim levels adds something called High Beam control which will actually turn on your high beams automatically, and then lower them if it detects a car in the oncoming traffic or if you’re under 45 miles an hour.

New for the 2018 Touring trim level – you’re going to get the standard Mazda Radar Cruise Control that includes Lane Departure Warning, Lane Keep Assist, and it’s part of the iACTIVESENSE suite of technologies. What that can do is steer you back towards the center of your lane if you wander too close to the edge. It can keep you a safe distance behind the car in front of you while you have the cruise control set, it can warn you if you’ve exited your lane unintentionally, and it can hit the brakes for you before you run into somebody at up to a hundred miles per hour.

Also new for 2018 is something called Mazda’s G-Vectoring Control. This modulates throttle response according to steering inputs to help the driver and the passengers feel less fatigued over long drives, especially while cornering.

Now standard equipment down to the Sport trim level on the CX-9 is something called Blind Spot Monitoring with Rear Cross-Traffic Alert. That’s a radar embedded into the rear bumper that keeps an eye on your blind spot for you. When somebody enters the blind spot, a light appears on the rear-view mirror if you turn your blinker on it will also chime a sound and if you’re backing up out of a parking spot or driveway and somebody’s walking or driving across your path you’re going to hear an audible alert with a notification in the rear view camera. Also standard equipment down to the Sport trim level is something called Smart City Brake Support. That utilizes a camera that’s embedded into the upper windshield that’s constantly watching the traffic in front of you and can apply the brakes even without driver input.

Also included up here in the cluster of sensors is a rain sensor – yes this vehicle will actually sense when rain is hitting the windshield and kick on the wipers automatically. For 2018 that’s now standard on the Touring and Grand Touring trim levels. Also new for 2018 exclusive to the Grand Touring model is the windshield wiper de-icer that’s a heating element embedded into the lower windshield to keep your wipers from sticking to the glass on those cold days.

Standard on the Grand Touring and Signature trim levels is something called Traffic Sign Recognition. That uses the forward-facing camera to scan the roadway for traffic signs such as stop signs, speed limit signs, do not enter signs, and it will display them on the heads-up display that shows on the front windshield. On the Grand Touring and Signature trim levels is an electronic parking brake, Sport mode, navigation, auto headlights, auto windshield wiper blades, automatic dual zone climate control, radar cruise control, blind spot monitoring, our rear heated seats along with the front heated seats, and a heated steering wheel, one touch up and down windows, and a one touch sunroof.

If you have any questions or you’d like to test drive this Mazda CX-9, stop in with us at THOMPSON MAZDA. We promise to make it worth the trip.