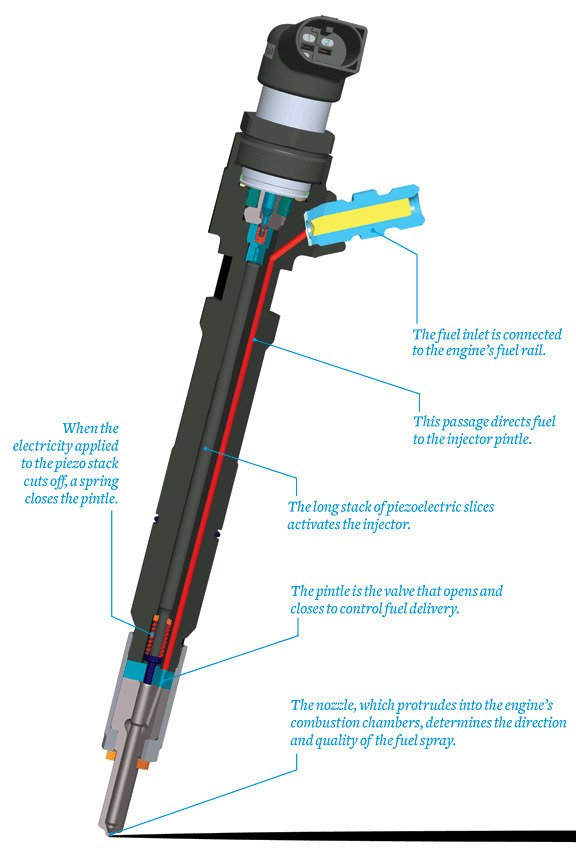 Certain crystalline materials, like quartz or ceramics, create minute amounts of electricity when squeezed. There’s even a word for it: “piezoelectric.” The process is also reversible; these same materials slightly expand when electricity is applied to them. Some of the major automotive fuel component manufacturers, such as Bosch, Delphi and Continental, among others, have used this peculiar property of piezo material to make extremely accurate fuel injectors.

The piezoelectric process has been documented and well known for over 100 years. This process takes place in vehicles with common rail diesel engines or engines with gasoline direct injection to improve the vehicle’s efficiency and performance.

Piezo fuel injectors are so accurate because of the amount of expansion necessary. One slice of piezo material two-hundredths of an inch thick expands only about 0.00002 of an inch when it is exposed to 140 volts of electricity. That isn’t a very large factor so the manufacturers stack hundreds of tiny piezo slices on top of each other so that the combined expansion increases the stack’s total motion. Piezo injectors can inject fuel into an engine’s cylinder up to seven times in one stroke.

Wouldn’t it seem that a simple electromagnet would be easier to manufacture than all the piezoelectric stuff? Well, piezoelectric materials have their advantages. For one thing, they open and close much quicker than conventional electromagnetic injectors. This makes for more precise control of the injector that controls how much fuel is sprayed into your engine. Piezo units also provide feedback so that the engine control computer can monitor opening and closing times and thus easily control the combustion cycle.  Lynch Chrysler of Mukwonago, WI tells us that this results in reduced emissions and better fuel economy.

Not only are piezo injectors more accurate than average solid injectors, these injectors can also perform some things that are completely beyond electromagnetic injector capabilities. For one thing, by applying a little less electricity, the piezo crystals—the most important parts of piezo injectors–expand less so the injectors can open just a bit which is great when a car is coasting.  Also, they are quick enough that they can inject several times (up to seven times in some engines) during a combustion cycle. That flexibility can be used to reduce emissions in gasoline as well as diesel engines.

All these benefits must come at a big cost, right? Actually, they don’t. Continental, for one, says that its piezo units are priced at about the same as old-fashioned electromagnet versions. Sometimes a superior technology presents itself to quickly displace the old one. In the case of piezo injectors, this appears to be what’s going on. We hope that this article has explained what piezo fuel injectors are and how they help a vehicle run at its finest!