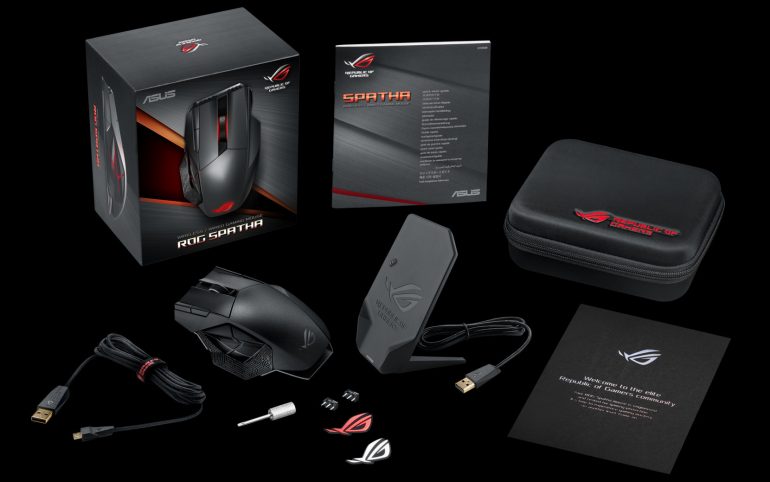 The Republic of Gamers (ROG) division of ASUS has announced the new Spatha wired/wireless gaming mouse that has been specifically optimized for massively multiplayer online (MMO) games. The mouse comes with tons of features – for instance, it comes with a sensitivity of 8200 dots per inch (DPI), 12 programmable buttons, a magnesium-alloy chassis and more.

The new Spatha gaming mouse features left and right buttons with the ASUS-exclusive easy-swap switchable socket design as well as programmable RGB LED effects. Six of the twelve programmable buttons are situated on the left side of the mouse body and they feature Alps switches for tactile feedback and are arranged to resemble the iconic ROG eye. The main left and right mouse buttons are independent of the mouse body and feature OMRON switches with a 20-million-click lifespan for increased durability, responsiveness, and tactile feedback. In addition to this the mouse has a DPI adjustment clutch and lets users switch between two sensitivity levels while in the middle of a game. Besides in wireless mode, the Spatha can be used in wired mode where it gives a polling rate of up to 2000 Hz. A special raised connector design prevents the cable from dragging on the desk to ensure a smooth glide across any surface. ROG Spatha can be charged in wired mode, or when placed in its charging dock. It comes bundled with a braided 2-meter cable and a 1-meter rubber cable. As to the RGB effects, there are six different presets – Static, Breathing, Color Cycling, Trigger, Random, and Battery mode. The mouse also has built-in flash memory for up to five gaming profiles.