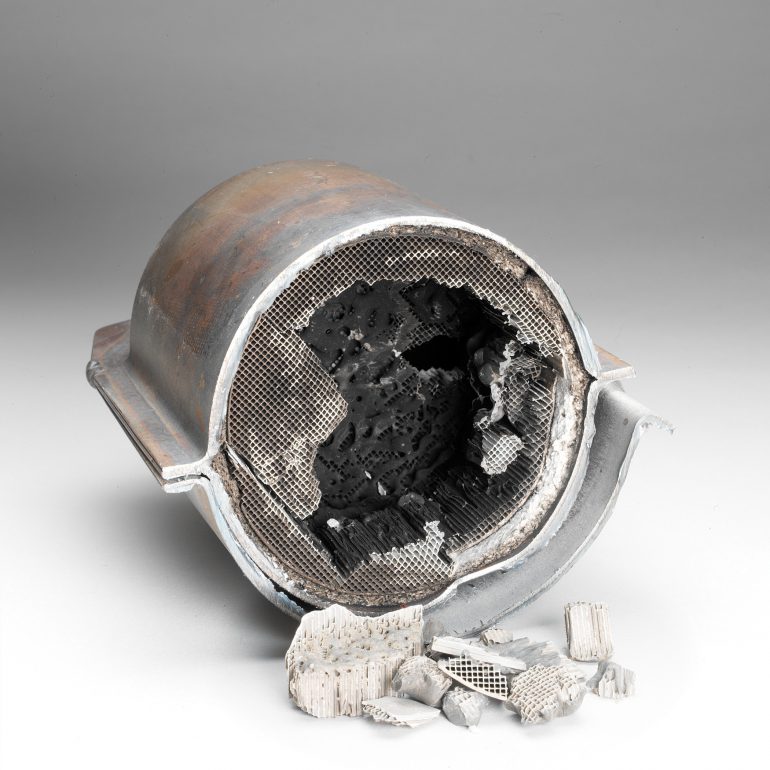 Each one of the 253 million cars on the road is a source of air pollution, and it’s a problem. Especially in large cities, the amount of pollution that cars and trucks produce causes serious health problems. One of the better examples is the city of Los Angeles. Los Angeles frequently becomes enveloped in thick, dark smog and when this occurs, increased emergency room visits and medically-related 911 calls result.

Back in the 1970s, the federal government got involved. To solve some of the problems that automotive air pollution was creating, the feds and various states created clean-air laws. These laws restrict the amount of noxious gases that cars and trucks emit when running.

They weren’t thrilled but to meet these new laws, automakers made significant changes to their engines so they burned more efficiently. One of the biggest of these came about in 1975 with a device called a catalytic converter. The job of a catalytic converter is to convert noxious pollutants into less harmful ones.

A catalytic convertor is a muffler-like device mounted in the exhaust system on a car or truck. During operation, it converts three specifically harmful gases into harmless ones:

This chemical magic is accomplished using a pile of ceramic beads coated with special catalysts. When these catalysts get flooded with exhaust gases, they chemically change carbon monoxide, nitrous oxide and hydrocarbons into harmless gasses. The result is a much cleaner exhaust.

Today, catalytic converters are pretty much trouble free but under some circumstances they can fail. Here are just a few of the signs to look for that may indicate a failing catalytic convertor:

In addition to these symptoms, the Check Engine Light (CEL) may come on. If you experience any these symptoms, it probably time to have your mechanic take a look at it. One of the most severe problems is that catalytic converters can get very hot when they malfunction. Hot enough to glow red hot. This obviously is a fire hazard.

How to protect your converter

A catalytic converter is a reliable vehicle emission system device and can last a long time, usually as long as the lifetime of the vehicle it is on. However, some engine system problems, lack of proper engine maintenance, and driving “short trips” can shorten a converter’s service life. With the assistance of Federico Kia of Wood River, a local Kia dealer in Wood River, IL, we have compiled a few suggestions to make your convertor last the lifetime of your car.