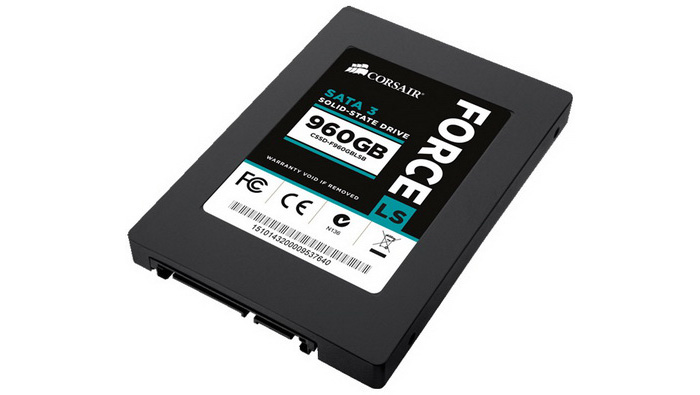 About 2 years ago Corsair released the then new Force LS line of solid-state drives. The unusual fact about these drives back then was that they incorporated a memory controller by Phison instead of the almighty SandForce. The main goal was to cut manufacturing costs and offer a competitive SSD line on a market full of expensive SandForce controllers. The attempt was a success although the Force LS line was not available in the US.

Two years later Corsair has decided to expand the still existing Force LS line by adding two new models with capacities of 480 GB and 960 GB. The rest of the specs remain the same – the line will be offered in the common 2.5-inch form factor and all the SSDs will be housed in chassis that are 7 mm thick. The line also has support for SATA 3.0 and includes 19 nm NAND flash memory made by Toshiba as well as Phison PS3108 memory controllers.

The new models will offer up to 560 MB/sec of read speed and 540 MB/sec of write speed and 4K random read and write scores of 84 000 IOPS and 88 000 IOPS, respectively. There’s also support for TRIM, S.M.A.R.T., and Garbage Collection technologies and the drives feature protection against data loss due to power loss and offer Corsair’s SSD Toolbox software.