What exactly is Steering-By-Wire? Let’s find out! 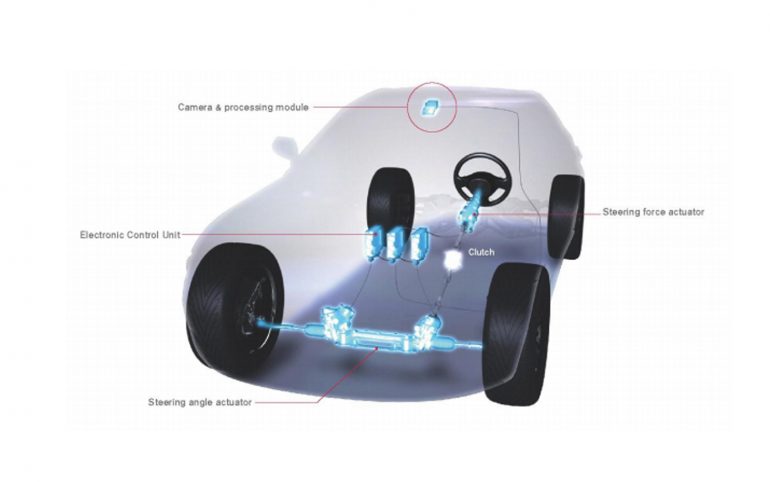 The term “fly-by-wire” comes from the aviation industry. Before the 1950s, the flaps and rudders on aircraft were controlled by long metal control cables that went from the aircraft’s flight surfaces directly to the pilot’s controls. This was an acceptable design until aircraft started to get larger. When aircraft and their flight surfaces started to become big, it became hard for pilots to control them with just their hands and feet. A more advanced system would have a pedal, for example, send a signal to a strong motor that moved the flaps or rudders.  This would allow a pilot to move huge control surfaces easily.  Although acceptance came rather slowly, after several years, fly-by-wire (FBW) systems became the way that all modern aircraft were designed.

It works for cars too

The same concept has also been used in automobiles.  The first item to be controlled by wire was a car’s throttle. In the old days, cars had metal throttle cables that ran directly from the gas pedal to the engine throttle. This system worked fine but they were prone to wear and corrosion over time. Today, metal throttle cables are for the most part gone as gas pedals are wired to small motors that control the engine’s throttle assembly.

What about steering systems?

Steering systems would be another application to consider. “Steer-by-wire” (SBW) systems could allow engineers to make steering more responsive than current fixed systems allow. However, some consumers are concerned. They are concerned that without a direct connection from a steering wheel to their cars wheels that system malfunctions could lead to bad accidents. Even today’s “power steering” systems are physically connected.  With a power steering system, if a part fails, you can still steer your car because your steering wheel connects directly to your front tires.

Some are experimenting SBW

In spite of some consumer concern, several car companies are evaluating SBW systems. Nissan has an interesting one with a “fail-safe clutch” mounted in the metal steering column.  In ­normal driving situations, this clutch is disengaged and the steering is SBW but if one of the steering control modules detects a fault, the clutch snaps shut and the steering acts as a conventional, electrically-assisted rack-and-pinion system.

We are told by Hiley Mazda of Arlington, a local Mazda dealer in Arlington, TX, that Mazda has been working on SBW too. In fact, the steering system in their Ryuga concept car is a pure SBW system, no mechanical backup. They believe that their SBW system is so reliable that a backup mechanical system is simply not needed.

Critics of SBW systems say that SBW eliminates steering system tactile feedback.  When you drive over irregularities, for example, you won’t feel it in the steering wheel.  Steering kickback, a common mid-corner occurrence on imperfect pavement, is eliminated. Some drivers do not like a lack of tactile feedback. Engineers are working on this.

Some argue that the electronic isolation of SBW increases driver’s comfort. There will be some acceptance factor issues as more and more manufacturers go the SBW route and it will remain to be seen if this is a problem with acceptance over time.  Long term, as consumers become more used to FBW, they will likely feel that SBW is the technology of choice.