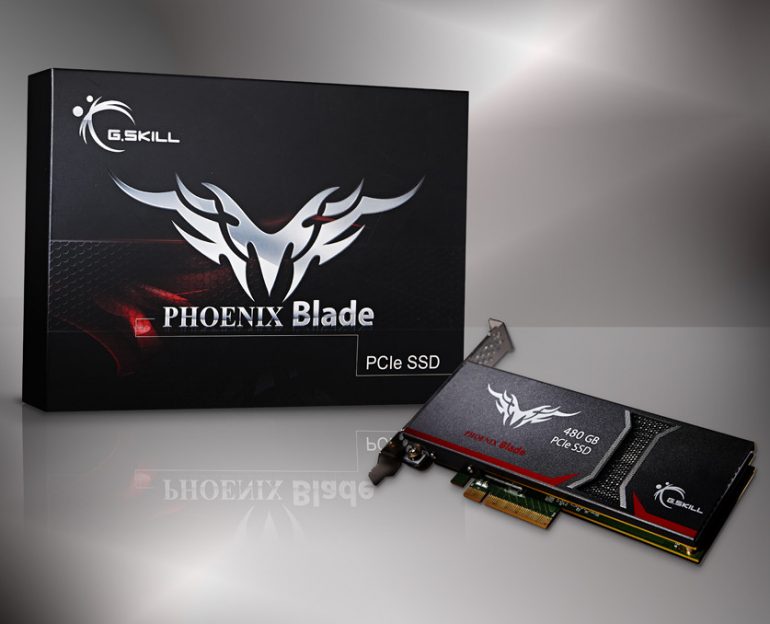 The main feature of the new Phoenix Blade Series PCIe SSD is performance – the drive is simply insanely fast. It comes with four LSI SandForce SF-2281 SSD controllers in a RAID 0 setup and offers a massive 480 GB array of MLC flash memory, which makes the drive up to four times faster than any typical SATA3-based SSD. The drive also has a PCIe 2.0 x8 high-speed interface, that allows the system, the drive is used into, to send massive amounts of data to the SSD and back, thus drastically improving performance for professional and industrial graphic applications. Thanks to all these technologies the Phoenix Blade Series PCIe SSD reaches up to 2000 MB/sec of read and write speeds and incredibly fast 245K IOPS for unmatched performance in data heavy applications such as games, professional industrial/graphic designs and many more.

Speed is nothing without reliability and G.Skill knows this very well. This is the reason why the Phoenix Blade Series PCIe SSD comes with a few technologies that guarantee your data will be safe. The drive supports TRIM and SCSI UNMAP for consistent write performance, reduced flash deterioration and prolonged drive life. The set of S.M.A.R.T. attributes allows users to monitor the drive’s health and take preventive measures against possible data loss. And CRC data protection makes sure that you will not suffer any data corruption during data transfers.