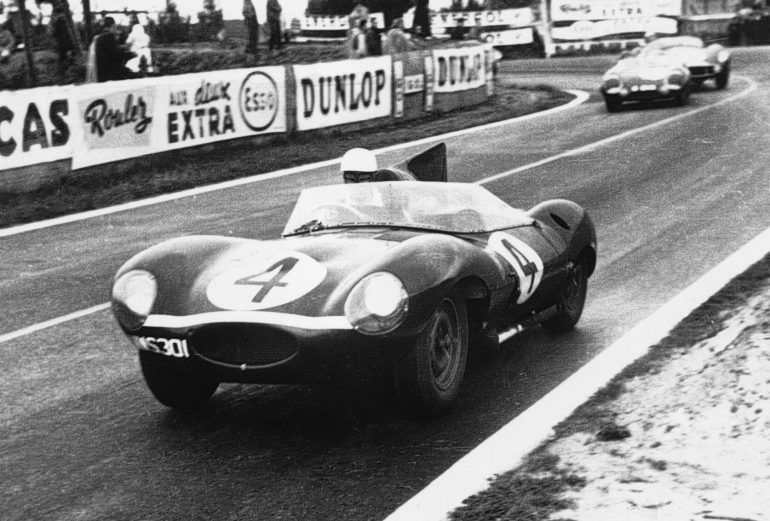 People love buying cars that win major races.  This fact has played a major part in automotive marketing from the beginning.  However, in the 1950s, winning races was especially important, not just because of the additional car sales that would occur.  When you won prestigious races, it was also a major boost of company pride.

Set the scene to the early 1950s and automobile enthusiasts would tell you that the most important sports car race in the world was the Vinqt-quatre Heures du Mans or as it is usually referred to “Le Mans”.  Back in those days, winning at Le Mans was not simply winning a race -it was winning The Race. It was tantamount to achieving super star status and it justified everything that went into the effort.  And, it sold a lot of cars for the company producing the winning car.  Winning at Lemans was everything.

Accordingly, in late 1950, the usual suspects;  Aston Martin, Cunningham, Ferrari, Nash-Healey, Talbot and many others were building race cars to compete  in the 1951 Le Mans event.  Jaguar, who had never won Le Mans, was also working feverishly to produce a car that would race.  The vehicle they chose was the brand new Jaguar C-Type sports car which was powered by a high performance version of their inline-six, dual cam motor engine, an engine that was supplied in their standard factory cars.

Winning races requires great drivers.  For this task Jaguar called upon Stirling Moss, who was one of the finest racecar drivers in the world at the time. Two less experienced drivers, Peter Walker and Peter Whitehead rounded out the race staff.  It paid off with both men and machine.  Sterling Moss’s Jaguar came from a mid-field start to take the lead on the third lap and eventually broke the lap record by six seconds at 105.2 mph.  The two other C-types in the race were doing well also and by the fifth hour, Jaguar was in positions one, two and three.  Unfortunately some mechanical problems took Moss’s car out of the race but Walker and Whitehead’s cars were the first and second to cross the finish line at an average speed of 93.40 mph.  It was Jaguar’ first win at Lemans and set the stage for an incredible lineup of Jaguar sports cars for decades to come.