Keeping Mice Out of Your Vehicle 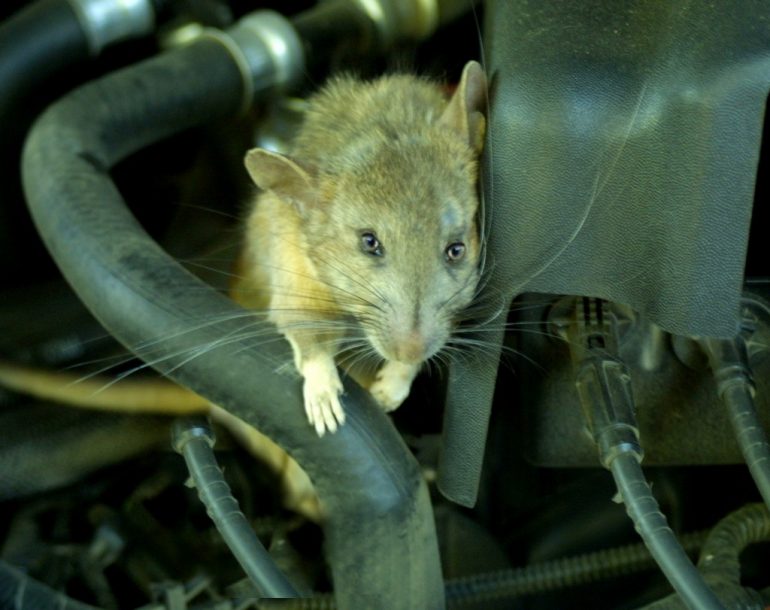 Every year mice and other critters crawl into cars and trucks and cause millions of dollars in damage. This damage can range from chewed wires and broken hoses to nests inside the motor, trunk and interior compartments. If it’s happened to you, then you know what an annoyance – and expense- it is.

So, what can a car-owner do? The problem answering this question is that are there are a lot of techniques to choose from. Some tactics are meant to kill or trap the pests, and others just discourage them from making your car into a rodent hotel. For this article, we collected a number of the most popular options. Some of these utilize professional repellants, others are more “home brew.”

By far the best solution to keep Chip and Dale out of your vehicle is to use a deterrent that keeps them away. Here’s a few techniques that have been suggested:

1) Moth balls (Paradichlorobenzine) will definitely keep rodents out of your car but keep in mind, they are a poisonous substance. You don’t want any young children or family pets finding mothballs and eating them. Some people suggest putting them in some old socks and placing them under car seats and under the hood, in spots that are difficult to access.

2) Peppermint oil applied on cotton balls or small swaths of cloth fixed or wired in place is said to keep animals out. Peppermint oil is strong smelling and allegedly repugnant to rodents (and far more pleasant smelling to humans than moth balls.)

3) Human hair and animal hair. Some say they have had good results by putting human or animal hair around in the car, or tied in bundles under the hood. The theory is that when rodents come into contact with hair, they sense the presence of “predators” and then scurry elsewhere,

4) Many people swear by using laundry dryer sheets, such as the “Bounce” brand.  These sheets have a strong fragrance and can be easily stashed under car seats or other places in your car. Best part is that you probably have some of these right now that you can try out.

6) Cayenne pepper sprinkled around the vehicle and under the hood is also said to work well. Pepper of this type is actually used in some the commercial spray products on the market so you know it has been proven effective.

Rat poisons have been around for decades and are a very effective way to kill rodents. When rats and mice eat the tasty pellets, they die within an hour. There are two serious drawbacks with rat poisons, though. First, if a predator eats a rodent that has rat poison in it’s stomach, the predator will likely be poisoned too. For example, think twice about using rat poison if you have house cats. Second issue: if a rodent dies in some a hidden space inside your vehicle, you will be treated to a rotting cadaver smell for several weeks. Yuck.

Then of course, you can catch the little devils. The first line of defense is the familiar snap mouse trap. These iconic devices have been used for more than a century and they certainly work. Their operation is pretty simple: bait is put on a lever (peanut butter works well) and when a mouse attracted by the yummy bait trips the lever, it releases a stiff wire bar attached to strong springs. The bar then smashes down on the mouse, usually killing it instantly. Some people believe this is still the most effective method of dealing with mice and rats. Well, it certainly does work and even leaves evidence of success behind.

Another type of rodent trap is a “glue trap.” These devices use a thick gluey adhesive designed not only to attract mice but to keep them stuck there permanently. Glue traps, which are widely available at hardware stores and many supermarkets, have several real advantages; They won’t snap on your fingers; they are disposable; and they can catch more than one mouse at a time. Plus they work really well.

Our friends at David Stanley Chrysler of Midwest City, a local Dodge, Chrysler, Jeep, Ram dealer located in Midwest City, OK, suggests a technique for those that prefer less violent methods to trap animals. “Have-A-Heart” traps capture rodents alive and unharmed so you can release them in some far-away area. Be careful of releasing the little guys in open fields, though. That makes them visible to flying predators like hawks and owls which sort of negates the “humane part” when they become lunch.

Obviously, having a family cat who has access to where your car is parked is an ideal deterrent. Cats are excellent rodent hunters and some can easily catch several a night. Just be absolutely sure that when you go to start your car in the morning that you know where your cat(s) are. Cats have a habit of climbing up into warm engine compartments, especially when it’s cold outside, and getting entangled with accessory drive belts. If you start the car with a kitty in there, the results won’t be a pleasant.

There are several kinds of electronic repellers that people have found to be effective. Some plug into a wall socket, some into the car lighter receptacle, and there are even some solar powered models

Every device works a bit differently but the general idea is to send out rodent-disturbing signals that keep the little guys away from your car. These signals could be high-frequency audio tones, vibrations or even flashing lights. The nice advantage to these electronic devices is that they are human and pet safe and you don’t have to keep reapplying them.
Summary

In this article, we have investigated many techniques to keep the rodent invaders at bay but which should you use?  Well, that’s the difficult part because it all depends on your particular circumstances. Some of the variables are: the type of rodent, the climate in your area, the frequency of using the vehicle, the proximity of rodent and whether you park your vehicle inside or outside. No single tactic seems to work for everyone, but many people fighting the mouse wars have decided that using a combination of two or three strategies at the same time may be the best possible plan.