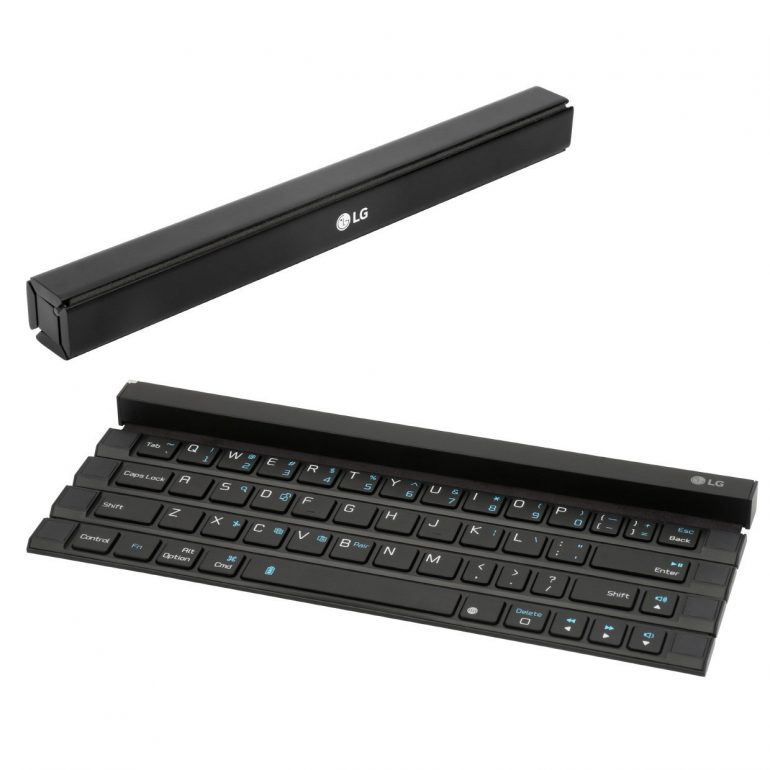 In the past decade the digital world has seen the arrival of numerous new devices such as smartphones, tablets, ultrabooks and other such gizmos that can provide fun and computational power when you need it while travelling. There’s one thing that characterizes most of these devices, though – they lack a physical keyboard and in many cases this can be a drawback.

Fortunately LG has you covered – the Korean company has developed a new portable keyboard that can be rolled and the resulting “stick” can be easily carried in bags, suitcases and even purses. The new peripheral device is called Rolly Keyboard KBB-700 and will be unveiled next week at IFA 2015 in Berlin, Germany. It features a four-stage fold up along the rows and this is what makes the Rolly Keyboard so easy to carry. The new keyboard has high-contrast keys, a built-in fold-out mobile device stand and 17 mm pitch that resembles the 18 mm pitch found on most desktop keyboard, which makes typing on the Rolly Keyboard easy and fun. The Rolly Keyboard itself is made from impact-resistant and durable polycarbonate and black ABS plastic and can sustain heavy loading. The device also has two sturdy arms that fold out to support smartphones and tablets in an upright position. By unfolding the keyboard you enable the auto pairing function Rolly Keyboard comes with so two different devices can connect to it via Bluetooth 3.0 with the ability to toggle between the two with a simple key press. All this hardware is powered by a single AAA battery, which also makes the Rolly Keyboard wireless.

“LG Rolly Keyboard is just one of the many premium input devices we’ll be unveiling in the coming months as we expand our accessories offerings,” said Seo Young-jae, vice president in charge of Innovative Personal Devices at LG Electronics Mobile Communications Company. “The goal was to create a product that could add more value to LG smartphones and tablets at the same time offering a unique design proposition that hadn’t been explored before.”

Unveiled next week for the first time, the Rolly Keyboard will make it to the USA in September. Pricing will be announced at the time of launch.