We don’t really know what kind of Google Play games you like but if you like puzzle games, then you should definitely try an app called Logic Dots. This game is not new but has recently gotten an update. In any case we haven’t reviewed it so here’s a well deserved article on it.

The main idea behind Logic Dots is to find where all the dots are located in a grid that you will get to see. The developers say this game resembles Sudoku so if you know how to play Sudoku you should not have a problem. Logic Dots starts with a nice tutorial that will show you how to play. Basically there is a number for each row and column you will see in the grid. The row number tells you how many dots there are in this row; the column number does the same. In addition to this for each level Logic Dots tells you how the dots should look like – if they are situated in a line or spread around. So you must use your logical thinking to find the exact dot locations but sometimes luck also helps. If you get stuck, though, the app provides you with a limited number of hints, so use them wisely.

Since Logic Dots is a puzzle game, it does not come with any special graphics effects but even then its 2D visuals are fine – they are nicely drawn in a high resolution and very sleek. The sound effects are nothing special too but we did not expect anything better in the first place.

All in all Logic Dots is a really nice puzzle game. Although it does not come with fancy graphics or sound effects, the app has everything to keep you occupied and more importantly to bring you fun. So if you are into puzzle games you should try it now.

ViewSonic® Corp., a leading global provider of visual display products,  announced the expansion of its projection lineup with the availability of its smallest DLP projector to date, the PJD2121. The company also announced the WPG-350 wireless presentation gateway, a cost-effective solution for... 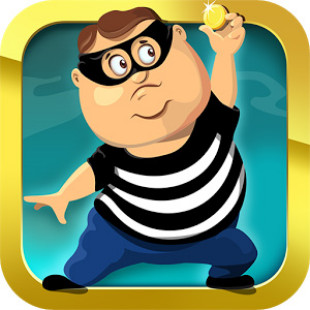 Daddy Was a Thief

Daddy Was a Thief is a fun game that will bring you a lot of enjoyment in a short time. The game follows the story of a laid-off bank employee who decides to steal money in order to pretend to his wife that he still has a job. So the guy dresses like a thief and the action begins! All you...