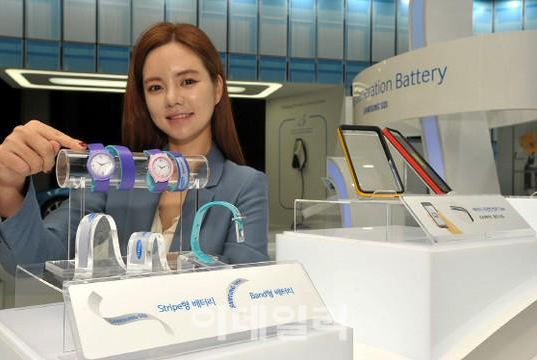 Devices such as smartphones, tablets, ordinary cell phones and other similar gadgets have been with us for about a decade but they have just recently started showing up with bendable components. A prime example is Samsung’s Galaxy S6 Edge smartphone which has a curved display.

The Korean company has made one step further, though – it has presented two flexible batteries at the InterBattery 2015 exhibition in Seoul, South Korea. The batteries carry the Band and Stripe brand names and will soon find their places in various portable devices and especially smartwatches and wristbands. They have one common goal – to increase the battery capacity of these devices and hence the usability. Samsung claims the new bendable batteries can increase the battery life of a smartwatch by up to 50 per cent.

Samsung promises that the Stripe and Band are very durable – the company has tested Band by bending it 50 000 times, matching the curvature of the human wrist. Even after this test the battery has been able to function properly. In addition Samsung has demonstrated a prototype smartwatch that used both batteries.

The first smartwatches with these batteries are expected next year. Analysts predict a bright future for smartwatches with sales reaching 100 million units in year 2020. Apparently Samsung wants to be ready when the time comes.