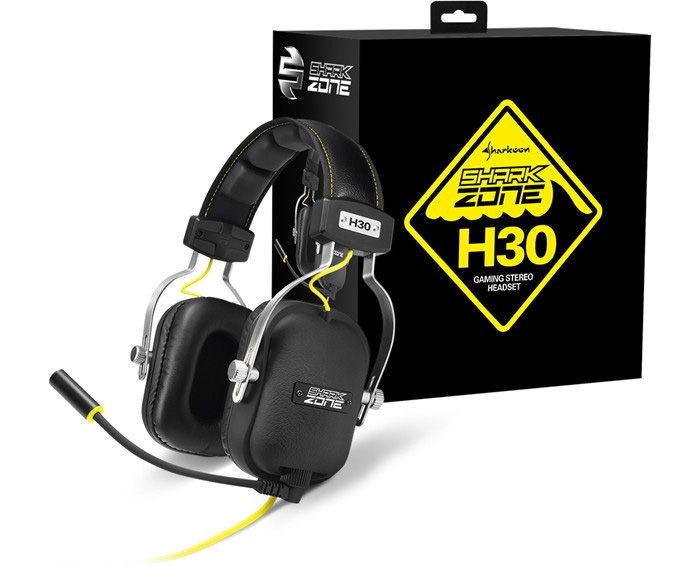 The maker of gaming peripherals Sharkoon has expanded its range of gaming headsets with the addition of the new SharkZone H30 headset that might as well be the perfect solution for the upcoming Fallout 4 game that is said to have three times more music content than its predecessor. The new headset comes with a robust and durable design, excellent wearing comfort and passive attenuation of ambient noise.

The SharkZone H30 headset includes soft ear pads and a padded headbang that provide for comfortable gaming sessions no matter how long they are. The headset also has two 40 mm speakers that emit balanced sound, a solid aluminum capsule that optimizes voice transmission, a detachable microphone and a flexible microphone arm. Thanks to the closed design of the SharkZone H30, the headset transmits sound waves in one direction only and the broadcasted sound barely leaks out of the H30 allowing gamers to fully concentrate on the game they are playing. The ear cups enjoy a special suspension that allows individual adjustments including height adjustments thanks to an included screw system. Sharkoon says the H30 is extremely durable so gamers should not fear the numerous adjustments they will make.

The SharkZone H30 gaming headset is based on a modular cable system with gold-plated connectors that allow two different connection modes. The H30 can be connected to a PC via two 3.5-mm stereo jacks, one for the microphone and another for the headphones, with the total cable length being 260 cm. For connections to notebooks and other devices the H30 provides a 3.5-mm TRRS plug for the microphone and the headphone. The total cable length here is 120 cm.

The new SharkZone H30 headset is now in stores where gamers can purchase it for EUR 36.99.