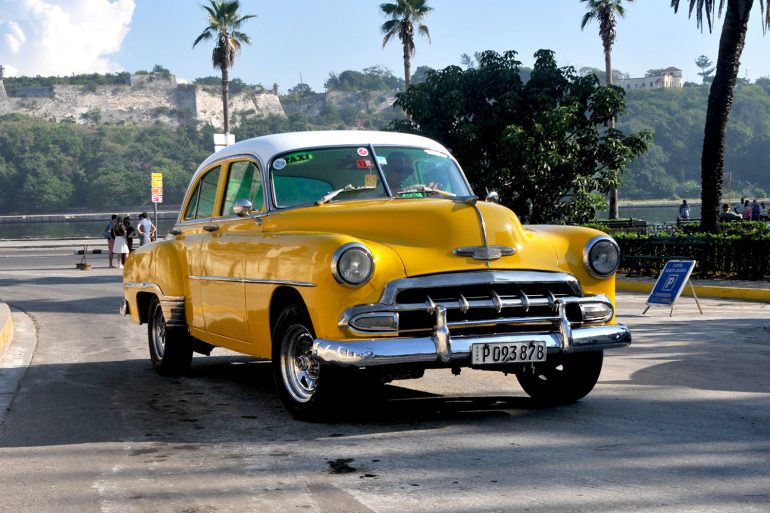 Since Cuba has basically been isolated from western society for nearly 50 years, some features of its society are locked in time, and automobiles are one of them.  Have you seen a picture of a car cruising down a city street in Cuba?  And do you want one of these cars from Cuba? Well, that might be possible soon. This is the case according to the Sales team at Suburban of Garden City, a full-service Chrysler, Dodge, Jeep and RAM dealer in Garden City, MI.

After over five decades of political animosity, Cuba and the United states have restored diplomatic ties. The Cold War has been over for a while now. The beginning of this new relationship was officially established when the US recently opened an embassy in Havana and Cuba opened its embassy in Washington, DC in 2016. The Cuban flag flew at the US embassy for the last time in 1961, before the U.S. broke ties with the Cuba in 1962 and United States companies were no longer allowed to do business in the country. This led to many Cubans needing to get cars from their government, who has decided who exactly can have a car and where they can go in it.

Hold on a minute…

Today if you visit the beautiful and brightly-colored city of Havana, for example, you’ll find that the streets are literally loaded with these 1950s vehicles. So, yes, these cars are used for driving every single day! An example of these vehicles is Chrysler’s old Plymouth brand. These vehicles are regularly used for personal transportation and even commercial use. However, contrary to popular belief, antique car enthusiasts probably won’t be descending on Cuba soon. The reason is simple, actually -these aren’t the vintage cars that American collectors want.

While some of these cars are in good condition, most aren’t. These are cars that have been very modified and patched together for over sixty years now.  They are known to be held together by bondo, duct tape and bailing twine with few original parts still on the vehicle. People have really improvised to keep these “Frankenstein” vehicles together. The “intrinsic value in collector cars is in the originality of its parts [in Western society],” said Steve Linden, a professional vintage automobile appraiser. Very important, he said, are “original body, the interior, engines, transmissions.”  Unfortunately, this isn’t the case with Cuba’s vehicles.

The experts still feel that some exporting will occur.  Some collectors will want a particular model of a collectible American car if the same model isn’t affordable in the US. We suspect that the greatest export interest will probably come from Cuban exiles, though, who are proud to buy a car that is a standard Cuban one, and representative of the era. Meanwhile, if you are interested in seeing what is basically the biggest antique car museum in existence, you can hop on a flight to Cuba!

We hope you have enjoyed learning about antique cars used on a regular basis on Cuba’s roads.