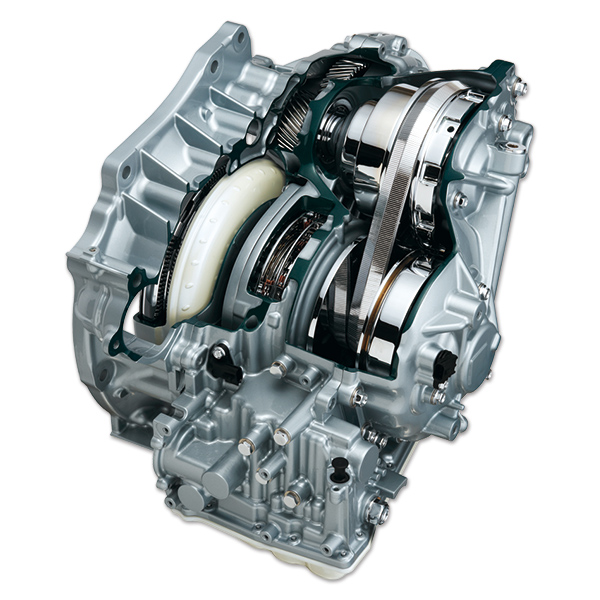 Conventional automatic transmissions use sets of gears inside that provide different ratios or speeds. Control units sense speeds and shift a transmission’s gears automatically to provide the most appropriate ratio for a given driving situation: lowest gears for low speeds, middle gears for acceleration and passing, and higher gears for efficient cruising. This is visually indicated in most vehicles with a selector display (the P-R-N-D-L thing).

A CVT replaces the complex gears sets common in standard transmissions with two variable-diameter pulleys, each shaped like a pair of opposing cones, with a metal belt running between them. The way it works is that during operation the pulleys move in and out such that a drive belt between moves higher on one pulley, lower on the other and this provides a numerical gear reduction.  You can picture this roughly as the way a 10-speed bike works, by routing the chain over smaller or larger gears to change the gear ratios.

The controls for a CVT-based car are the same as an automatic-based car: Two pedals (gas and brake) and a P-R-N-D-L-style shift pattern. When driving a car with a CVT, you won’t hear or feel the transmission shift, though.  It simply raises and lowers the engine speed as needed, calling up higher engine speeds (or RPMs) for better acceleration and lower RPMs for better fuel economy while cruising. Many people find that driving a CVT-based automobile is a little disconcerting because of the sound it makes.

Engines do not develop constant power at all speeds; they have specific speeds where either torque, horsepower or fuel efficiency are at their optimum levels. Because a CVT can theoretically adjust to any gear ratio, engineers can program it to give maximum performance during all these situations.  For example, when power is needed, or maximum fuel-economy is desired, a CVT can adjust to those conditions more accurately than a standard automatic transmission.

The CVT’s biggest problem has been user acceptance. Because the CVT allows the engine to rotate at any speed, the noises coming from under the hood can sound odd to ears accustomed to conventional automatic transmissions. The gradual changes in engine note sound like something is “slipping”– signs of trouble with a conventional transmission, but perfectly normal for a CVT. Automakers have gone to great lengths to make the CVT feel more like a conventional transmission. For example, many CVTs are now programmed to simulate the “kick-down” feel of a regular automatic when the pedal is floored.

Because early automotive CVTs were limited as to how much horsepower they could handle, there has been some concern about the long-term reliability of the CVT.  This has not proven to be a problem, though. Advanced technology has made the CVT quite robust and reliable. Nissan has more than a million CVTs in service around the world and says their long-term reliability is comparable to conventional transmissions.

The future of the CVT remains to be seen.  In spite of the obvious efficiencies of CVTs, customers can be fickle and may prefer and older technology.  We will likely see how CVT transmissions fare over the next few years or so.