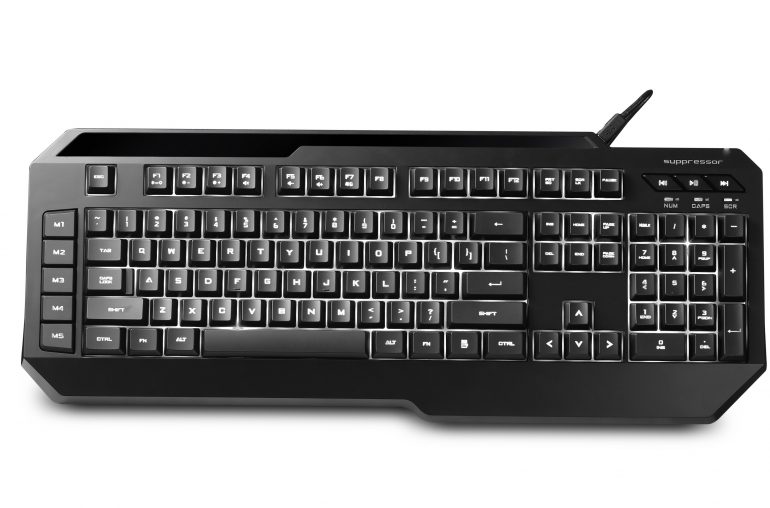 With time passing by we have become used to associating Cooler Master with power supply units and cooling solutions, but during the past few weeks the company has been exceptionally busy releasing various hardware components designed for gamers. There’s nothing bad in this activity so here’s a new such component – the CM Storm Suppressor gaming keyboard.

The Storm Suppressor is the latest addition to Cooler Master’s line of gaming keyboards. Designed for gamers who want to be a silent assassin the Storm Suppressor provides everything you will need during heavy gaming sessions. The keyboard offers a detachable USB cable for better and easier cable management and travel and a white LED light that keeps you gaming even in the dark. The new CM product also has a light and durable chassis, silent membrane key switches with long life material for many hours of gaming and instant multimedia keys that will save you both time and effort when launching various multimedia apps and functions. In addition the keyboard has a removable wrist rest in the box and a LED backlight that can be adjusted in three brightness levels or be completely turned off.

The Storm Suppressor is powered by a 72 MHz 32-bit ARM Rapid Engine processor and offers up to 75 macros that can be saved within 5 easily swappable profiles via built-in shortcut keys. This means that there are up to 15 macros per profile and all of them reside in the built-in 128 KB of on-board memory, which means the Storm Suppressor is ready for plug-and-play use. Moreover the macros can be recorded via hardware or software.

Unfortunately for some of you the new Cooler Master Storm Suppressor will be available in Eastern Europe and Russia only where it will sell for EUR 45 when it becomes available. In Asia the keyboard will be available this month and in Eastern Europe and Russia it will be on the market in December 2014/January 2015. Of course, if you insist on having the Storm Suppressor that much, maybe there will be a way to get it online.