ASUS, the leader in innovative motherboard solutions,  unveiled the first motherboard in its newly-developed “TUF” (The Ultimate Force) Series, the SABERTOOTH 55i. The TUF Series is specially developed to meet the heavy computing demands of power users and perform well even under extreme conditions. Such computer enthusiasts often demand high-quality motherboard components and the most stable computing platforms.

To achieve uncompromising stability, TUF Series motherboards have undergone a more stringent testing program than what most motherboard producers currently undertake. Solidly constructed and equipped with resilient components that have passed demanding military-style testing, the TUF Series triumphs over the harshest operating conditions to deliver robust performance. The debut SABERTOOTH 55i model, designed around a “Marine Cool” concept, incorporates the Intel® P55 chipset and “tough” features to give users a supremely solid and stable computing platform. 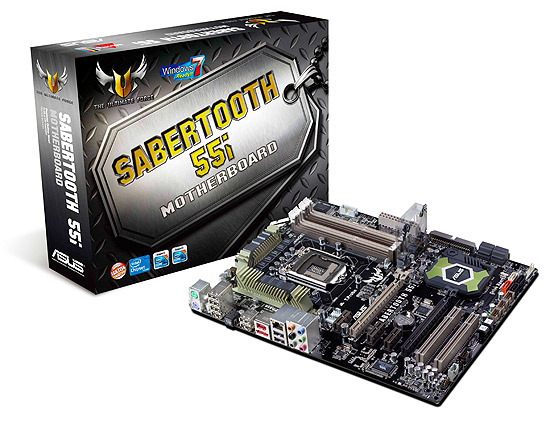 The ASUS SABERTOOTH 55i motherboard, equipped with the new CeraM!X heatsink, delivers exceptional cooling to active components and uncompromising system stability even under intense operating conditions. With its advanced ceramics-based composition—commonly used in the aerospace industry for heat insulation—the heatsink dissipates heat rapidly to achieve ultimate cooling. Ceramics replace traditional anti-oxidant compounds to create a microfin surface texture for enhanced cooling. This rough surface offers an expanded area for heat induction into the surrounding air. As a result, more heat is rapidly conducted away from the active system—allowing users to enjoy previously unattainable levels of stability. 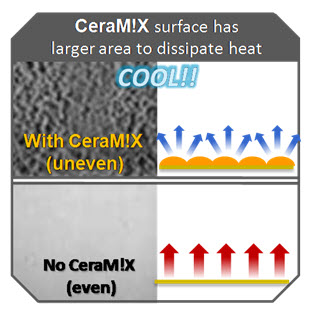 As optimal memory operation relies on good cooling, the SABERTOOTH 55i motherboard includes the CoolMem! Fan Frame that encloses most standard 40mm or 50mm computer fans and fits them directly over the memory module. Users thus gain an affordable cooling solution that significantly stabilizes memory operation. 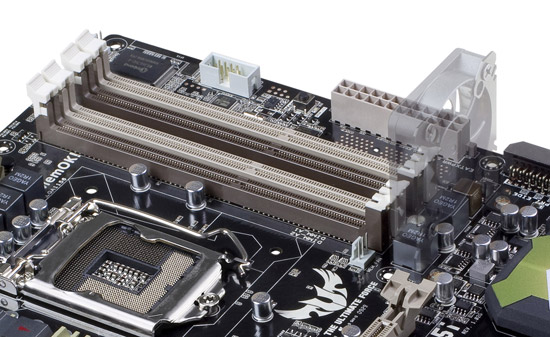 To ensure users experience uncompromising performance, the SABERTOOTH 55i incorporates only high-grade, rigorously-tested components. These perform robustly even under the most demanding conditions. For example, all its capacitors have undergone thermal shock tests to ensure continuous, stable operations during rapid temperature changes in the 60°C range. In fact, all its capacitors and VRM MOSFETs have been certified for military-level use through stringent testing.

Optimized Power Use with E.S.P.

The SABERTOOTH 55i motherboard delivers E.S.P. (Efficient Switching Power) to all major components for superb system efficiency. Besides delivering efficient power to the CPU and memory, the power design also applies the same level of efficient power to the PCIex16 expansion slots and IC. This improves overall power efficiency and reduces the amount of heat generated—resulting in cooler and more reliable operations. Additionally, the E.S.P. converts power at 90% efficiency compared to a conventional linear design that is only about 60% efficient. Built for robust performance, the SABERTOOTH 55i—and ASUS TUF Series motherboards as a whole—incorporates the latest breakthroughs in heatsink composition and high-grade, military-tested components to enable users to build their DIY systems around one of the most solid and stable motherboards ever created.