ASUS, a leading producer of home theater PC (HTPC) solutions, today added a new member to its HDAV family: the ASUS Xonar HDAV1.3 Slim sound card. The CES-award winning Xonar HDAV1.3 Series of audio cards has been credited for revolutionizing the world of HTPC by offering the world’s first and only solution to bitstream true Blu-ray audio on the PC platform, and this new offering is no different. 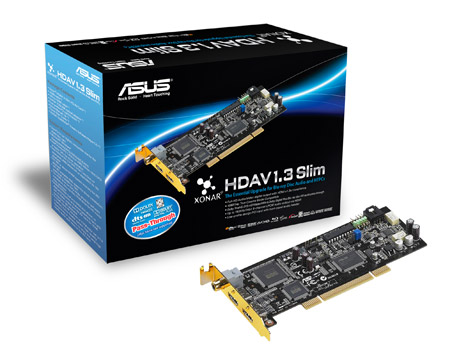 The Xonar HDAV1.3 Slim is equipped with an essential digital HDMI1.3 interface, which bitstreams next-generation Blu-ray quality audio formats such as Dolby TrueHD, DTS HD Master and Dolby Digital Plus via the ArcSoft TotalMedia Theatre application to the user’s AV receiver. This powerful playback ability, combined with a low-profile design and bundled low-profile bracket, makes the HDAV1.3 Slim perfect for next-generation HTPCs right out of the box.
True Cinematic Video Enjoyment

The Xonar HDAV1.3 Slim offers bit-to-bit exact lossless audio output, eliminating the need for Blu-ray audio downsampling that would result in poor quality audio output. It also transmits both video and audio through a single HDMI cable, helping to eliminate cable clutter. Furthermore, most motion picture cameras used for Hollywood movies capture video at 24 frames per second. Content recorded on Blu-ray media are also based on 24p. With the Xonar HDAV1.3 Slim’s support for 24p video via HDMI, users with a 1080/24p compatible LCD monitor and a 1080/24p player will be able to bring cinema-like visuals out of their HTPCs and fully experience digital videos the way they were produced in Hollywood studios.

Key Features at a Glance