On Tuesday, November 1, 2011 Calxeda, a US-based developer of server microprocessors on ARM architecture, introduced the EnergyCore ARM Cortex-A9 Server Chip. This is the world’s first microprocessor that is targeted at servers using the Cortex-A9 technology and is designed for software developers who would like to design server programs for ARM architecture.

The Calxeda EnergyCore system-on-chip includes four ARM Cortex-A9 processors along with a supercomputing-class 80-Gigabit fabric switch and an integrated management engine with software for power optimization, all combined on a single piece of silicon.

The EnergyCore SoC includes a full set of server I/O features and a large 4MB ECC L2 cache, which enables system vendors to offer a complete server solution that consumes only 5W, including 4GB of ECC memory and a large capacity SSD. 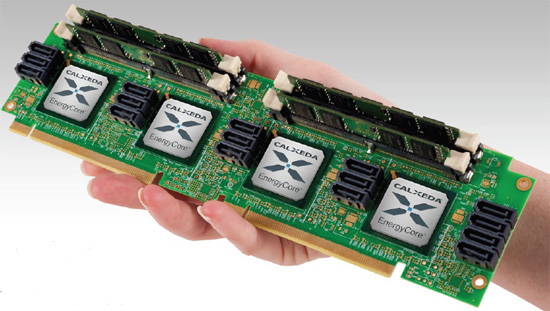 The new processor features extremely low power consumption when compared to today’s most energy efficient server processors and this makes it the perfect product for Internet serving, large applications, media streaming, scalable analytics and mid-tier infrastructure such as caching and in-memory scalable databases.

Calxeda expects to have the chips on the market in the middle of 2012.