“We can’t wait for our customers to start using a nüvifone,” said Cliff Pemble, Garmin’s president and COO. “Our lives are all about location. The nüvifone is designed around that premise and that’s what differentiates it from the myriad of other phones on the market.”

“Whether it’s talking and navigating simultaneously, geotagging a photograph, or navigating to an address on the web, the nüvifone seamlessly links navigation with other commonly performed activities,” said Benson Lin, Asus Vice President and General Manager of Handheld Business Group.

The Garmin-Asus nüvifone series is a breakthrough product line that integrates navigation and location based services (LBS) like no other phone in the market today. It is ideal for those seeking an all-in-one, LBS-centric touchscreen phone, mobile web-browser and personal navigator. The nüvifone G60 and M20 have touchscreen displays that feature three primary icons – “Call,” “Search,” and “View Map.” Customers can easily scroll through the other icons by swiping their finger across the displays, and a built-in accelerometer allows every screen to be viewed in either portrait or landscape orientation.

The nüvifone G60 and M20 come with preloaded maps of North America, Eastern and Western Europe, or specific Asia-Pacific regions. Since the maps reside on the nüvifone, customers will receive turn-by-turn voice-prompted directions to millions of destinations without accessing their carrier’s data plan. The nüvifone G60 and M20 utilize a real GPS receiver with hotfix, in addition to A-GPS(assisted GPS), so that customers always have directions at their fingertips, regardless of if they are in their provider’s coverage area. 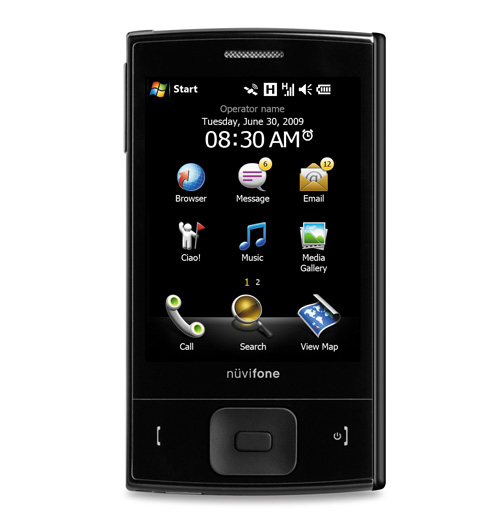 Just as with Garmin’s acclaimed nüvi® product line, the nüvifone series has millions of preloaded points of interest (POIs) including hotels, restaurants and street addresses. The POIs can be easily accessed for turn-by-turn voice prompted directions. If a turn is missed along the route, the nüvifone G60 and M20 will automatically recalculate a route and get the user back on track. The nüvifone also offers a “Where am I?” feature so that users will know their exact latitude and longitude coordinates, nearest address, intersection, hospital, police station and gas station with one touch of the screen. And to help them find their car in an unfamiliar spot or crowded parking lot, the nüvifone automatically marks the position in which it was last removed from the windshield mount. The nüvifone comes with a unique suction cup mount cradle that fastens to the windshield and will also charge the device while it is being used.

Although navigation is a key component of the nüvifone series, the devices do more than “just navigate.” Both the nüvifone G60 and M20 incorporate top-of-the-line phone capabilities with premium features such as 3.5G data connectivity, SMS text messaging, email, Wi-Fi, Bluetooth and more.

1-large-V3The nüvifone G60 and M20 have a full HTML browser that customers can easily zoom in or pan with their finger, and pages may be viewed in either portrait or landscape. Users can surf the web on their phone via Wi-Fi or 3G networks, and the pages are presented similar to a PC browser.

The nüvifone G60 and M20 include a built-in camera with auto-focus. The camera automatically geotags images with an exact latitude and longitude reference of where the image was taken. The user may then save the image so they can navigate back to the location, or email the geo-tagged image to others. The nüvifone also provides direct access to millions of geo-located landmark and sightseeing photographs available through select picture sharing site, which are searchable and are sorted by the distance from the current location.