An unrivaled value at just $1,249.99, the Gateway® FX6800-01e means the world of extreme gaming and turbo-charged fun isn’t limited to high-priced systems costing thousands of dollars. At its heart lies an Intel Core i7-920 processor, providing gamers with the critical horsepower to pwn even the most worthy opponents. Partnered with an ATI Radeon HD4850 video card, 3GB of DDR3 triple channel memory and high definition audio, it delivers the performance, graphics and audio necessary for those who want to experience their digital entertainment full throttle. 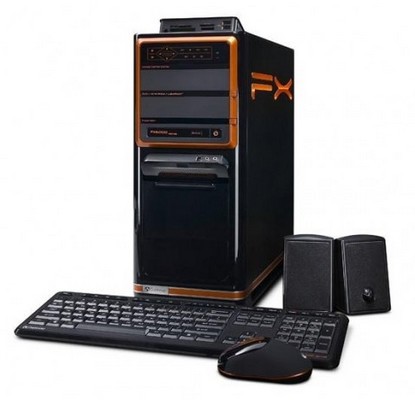 “The new Gateway FX6800-01 featuring the Intel Core i7-920 Processor is another example of our commitment to bringing high-performance PCs into the mainstream price range,” said Glenn Jystad, senior manager, desktop products for Gateway. “The screaming performance this desktop delivers is more than enough for most gamers, and leaves them with a lot more money for games, as well as the ability to play them better than ever before.”

Hard-core gamers who crave white-knuckle rushes and heart-palpitating action will find the Gateway®.99, it is fueled by the even more powerful Intel Core i7-940 processor, making it the ultimate holiday gift and game crusher. Realistic heart-stopping, jaw-dropping visuals are provided by ATI Radeon HD4870 X2 graphics card and 6GB of DDR3 memory for spine-tingling fun. FX6800-05 delivers all that and more. Aggressively priced at $2.999

And the excitement doesn’t stop there. In addition to its massive 1TB hard drive, Gateway takes it to the next level, adding a revolutionary new high-speed drive — an 80GB Intel High Performance Solid State Drive. This industry-leading drive can’t be beat for drive-intensive applications with extreme performance needs. Devoid of moving parts, it provides faster and more reliable data storage than traditional hard drives, with less heat and noise.

“Solid state hard drive technology on a gaming PC will make a huge difference in the fun factor,” continued Jystad. “Currently used in mission critical environments, users are seeing boot up times that are two to three times as fast and they are running cooler and quieter, and without data fragmentation, all of which are hugely valued by gamers as well.”

“Fueled by the best desktop processors on the planet — with Intel Hyper-Threading and Intel Turbo Boost Technology — the new Gateway FX Series desktops will transport gamers to a new level of performance and PC enjoyment,” said CJ Bruno, vice president, sales and marketing group and president, Intel Americas, Inc. “Not only can the new Intel Core i7 processor handle today’s most complex and immersive games, but it’s also powerful enough to handle tomorrow’s gaming advances, ensuring these new systems will continue to meet customers’ needs for years to come.”

In addition to their powerful engines, the FX Series desktops offer numerous user friendly features that add convenience, flexibility and value to their overall proposition.

Hidden pop-out doors keep ports tucked away, out-of-view and free from dust and debris. A pop-up on the top of the system provides convenient access to media ports and the Smart Copy button, which simplifies the storing of digital photos. A hidden pop-out on the front hides the i/o ports most often used for temporary items such as a microphone, headphone, and IEEE 1394 cables.

The FX6800 PCs come standard with two internal hard drive bays. Customers can also quickly and easily add a third and fourth hard drive by simply sliding out a tray located on the front lower section of the chassis. A completely tool-less process, users simply insert the hard drive into the tray and Vista will immediately recognize and configure it for use.

A backup button on the front of the system is tied to the backup feature found in Microsoft Windows Vista. Using this button, consumers can quickly and confidently copy their files to any storage location they choose.

The Gateway FX Series Desktops are backed by a one year limited warranty(3). Gateway’s commitment to quality and reliability is evident in its award-winning line of PCs as well as in its exceptional service and support programs(4). In addition to the company’s standard limited warranty options, its extensive online support center helps customers maximize their PC investment; it gives them easy access to customer support representatives and information on important issues such as warranties, technical issues and upgrading.