GIGABYTE, a leading manufacturer of motherboards and graphics cards today is pleased to announce the GA-MA790FXT-UD5P, their first AMD “Dragon Platform” qualified motherboard with next generation AMD AM3 Phenom™ II processors support, enabling the very latest in definitive high performance platforms for work, home and play. 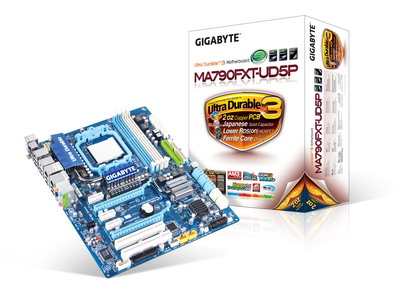 No performance platform would be complete without the very latest in graphics technologies and the GIGABYTE GA-MA790FXT-UD5P doesn’t disappoint. Equipped with the AMD 790FX North Bridge, the GA-MA790FXT-UD5P offers Dual x16 PCI-E 2.0 graphics interfaces to deliver up the latest ATI CrossFireX™ support for the ultimate gaming platform. Plugging in dual graphics cards also enables support for up to 4 monitors, ideal for users wanting to boost their productivity by maximizing their multitasking capabilities.

Getting the most performance out of your system has never been easier as the GIGABYTE GA-MA790FXT-UD5P delivers AMD OverDrive™ support, allowing high-end users the ability to fully customize and monitor the performance and settings of their system. In addition, high-end performance junkies will love the latest EC AOD-ACC Embedded Controller, which allows AMD Phenom™ II Black Edition CPUs to be overclocked using the AMD OverDrive™ utility further than was previously possible.

Advanced connectivity options are key to any high end system, and the GIGABYTE GA-MA790FXT-UD5P delivers with a combined total of up to 10 SATA 2.0 device support. In addition to the 6 SATA 2.0 (3Gb/s) ports from the SB750 (with RAID 0, 1, 5, 10, and JBOD support), the GIGABYTE GA-MA790FXT-UD5P provides an additional 4 SATA 2.0 ports through the onboard JMicron controller (JM363 & JM322 with RAID 0, 1, and JBOD support), enabling GIGABYTE’s Smart Backup technology which allows users to connect up to 4 SATA 2.0 devices for effortless hardware-based RAID data protection on-the-fly. The GIGABYTE GA-MA790FXT-UD5P also features Dual Gigabit LAN connections with Teaming, which allows 2 single connections to act as 1 single connection for twice the bandwidth to improve overall throughput.