In a just-published paper in the magazine Science, IBM researchers demonstrated a radio-frequency graphene transistor with the highest cut-off frequency achieved so far for any graphene device – 100 billion cycles/second (100 GigaHertz).

This accomplishment is a key milestone for the Carbon Electronics for RF Applications (CERA) program funded by DARPA, in an effort to develop next-generation communication devices. 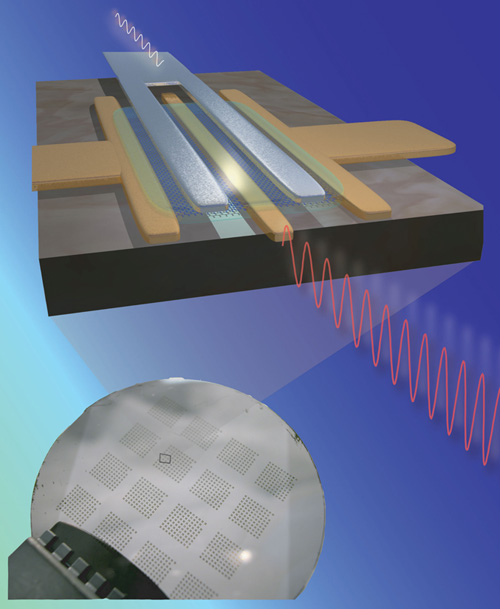 “A key advantage of graphene lies in the very high speeds in which electrons propagate, which is essential for achieving high-speed, high-performance next generation transistors,” said Dr. T.C. Chen, vice president, Science and Technology, IBM Research. “The breakthrough we are announcing demonstrates clearly that graphene can be utilized to produce high performance devices and integrated circuits.”

Graphene is a single atom-thick layer of carbon atoms bonded in a hexagonal honeycomb-like arrangement. This two-dimensional form of carbon has unique electrical, optical, mechanical and thermal properties and its technological applications are being explored intensely.

Uniform and high-quality graphene wafers were synthesized by thermal decomposition of a silicon carbide (SiC) substrate. The graphene transistor itself utilized a metal top-gate architecture and a novel gate insulator stack involving a polymer and a high dielectric constant oxide. The gate length was modest, 240 nanometers, leaving plenty of space for further optimization of its performance by scaling down the gate length.