Microsoft has updated its Office for Mac software package with the new Office 2016 for Mac computers. The software entered its beta testing period back in March 2015 but now users can get the final product.

The new Office 2016 is the first major release for Mac computers since Office 2011 and now it comes with various improvements and new versions of Word, PowerPoint and Excel. The new Office version comes with many elements found in the Windows version of Microsoft Office and the mobile Office apps for improved cross-platform familiarity. Now users of Office for Mac get the Ribbon to organize tools and formatting options and a task pane for improved graphics customization in all three of the main Office apps, along with new themes and styles. In addition to all this the new office package includes a new Yosemite-style design that offers features such as full screen support, Retina displays, multi-touch gestures, cloud integration and more. Word now comes with a new design tab for quick layout, color and font customization while working on a document. Excel offers a chart preview feature that suggests the charts that best fit a set of data and it now adds deeper data analysis functionality with PivotTable slicers for dealing with large amounts of data to find patterns. And PowerPoint now includes an improved Presenter view that shows the current slide, the next slide, speaker notes and a timer, which is very similar to the PowerPoint program for iOS. 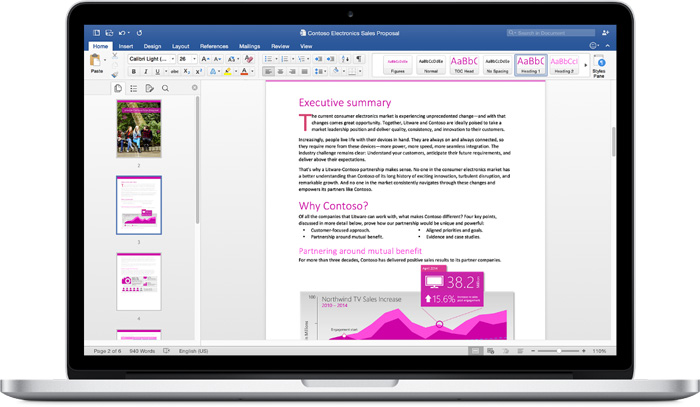 The new Office 2016 for Mac computers is now available to all Office 365 subscribers and is supported on computers, which run OS X Yosemite or newer. Office 2016 will also be available as a one-time purchase in September of this year but the price of the software is unknown.