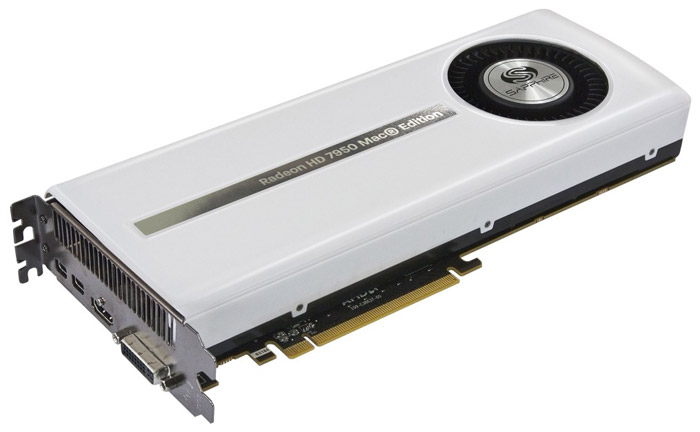 Sapphire says the new graphics card targets Apple’s Mac Pro series of desktop computers and provides up to 200 per cent higher frame rates in games, up to 30 per cent better performance in general benchmarks and up to 300 per cent more power for graphics intensive applications compared to GeForce 8800 GT graphics cards that most Mac Pro computers are equipped with.

The Sapphire HD 7950 Mac Edition comes with 3 GB of GDDR5 memory and has support for Open GL 4.2 and Open CL 1.2. The card has two mini-Display outputs that offer a maximum resolution of 3840 x 2160 and a HDMI port that offers the same resolution. Just like any high-end product the Sapphire HD 7950 Mac Edition comes with a Dual-Link DVI port that offers 2560 x 1600 pixels of resolution. The graphics card supports two display outputs that can work at the same time so connecting two monitors simultaneously is not a problem.

The Sapphire HD 7950 Mac Edition is compatible with all Mac Pro models from 2010 and latest and has full support for Mac OS X Lion, Mountain Lion and later. An interesting feature is that the card supports Microsoft Windows too – but you must first switch the card’s BIOS to Windows mode.