MSI used only the very best components and even equipped the R4770 with traditionally high-end GDDR5 high-speed memory. Compared to graphics cards in this price segment the MSI R4770 stands out by virtue of its great performance while being exceptionally energy-efficient. 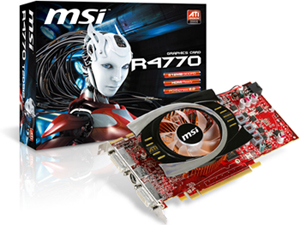 By taking the lead in implementing the 40 nanometer graphics processor, which means it is possible to increase more circus or transistors with the extra space. Another advantage over the conventional 55 and 65 nanometer ones is the 40 nanometer GPU reduced power consumption which in turn also minimizes heat emission, and therefore allowing for a bigger overclocking potential.

In the past only high-end graphics cards such as the R4870 and the R4890 series had been equipped with high-speed GDDR5 memory, MSI is taking the lead in adding GDDR5 memory to their budget cards, providing for higher clock speed. Furthermore, compared to equally clocked GDDR3, MSI R4770 series’ GDDR5 memory offers twice the data throughput bandwidth which is essential for modern games with their huge demand for complex rendering operations.

Surpassing similar products on the market by 15% more performance

Not only is the MSI R4770 providing superior high-end graphics performance, but also uses the ATI PowerPlay technology to implement a dynamic power management function. This means that even under full load and power consumption is at its peak, the MSI R4770 graphics card won’t consume more than 90 Watts, putting it far upfront the competition.