The all new N250GTS Tiwn Frozr uses the Twin Frozr thermal design featuring intelligent dual PWM fans, which adjust their speed based on the GPU’s loading and temperature. This design helps the card to run quietly for normal applications; while maintaining cool, low-noise operation when running 3D programs and games. The dual-fan design also helps to ensure stable operation, if one fan fails, another would be still able to keep running to dissipate heat. 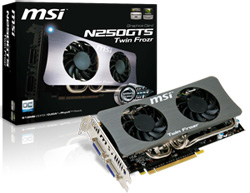 The 250GTS Twin Frozr also uses three high-efficiency heatpipes which greatly increase speed of heat dissipation, and with the dual fans providing twice the amount of air blowing across the components. With Twin Frozr thermal design, overheating has become past. 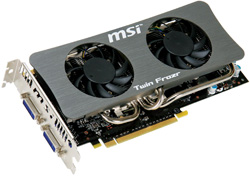 In order to provide customers a longer lifespan, higher performance product, MSI N250GTS Twin Frozr features the extra high-quality Hi-c CAP for GPU power supply. Hi-c CAP is made of the extremely rare Tantalum material – a expensive, incredibly stable metal – so that, if run at 65° C, it is able to keep running for over 200 years. This product leaves all other solid capacitor standards in the dust, and is one of highest level components in the industry. Tantalum also helps to prevent against electricity leakage (less package) for high quality power output and stable performance when overclocked and/or running hot.