MSI, the world’s leading mainboard manufacturer, announced its most affordable one of X58 mainboard, X58 Pro. It offers an innovatively new architecture that adopts the latest Intel® X58 Express chipset that supports the latest Intel® Core i7 processor, along with ultra-high bandwidth QPI (Quick Path Interconnect) transmission system and high-speed 3-channel DDR3 memory, resulting performance so extreme that has ever seen in mainboards. X58 Pro also has utilized the Gen.2 DrMOS, which introduced exclusively by MSI since the P45 series, improving its power efficiency more than 93% to bring best performance.

Insist on DrMOS to bring the maximum power-efficient

In order to maximize performance and provide a stable and adequate power supply environment, MSI X58 Pro has utilized the Gen.2 DrMOS, which is recommended by Intel for processor power design, along with the exclusive BIOS-level Active Phase Switching (APS) technology for better energy-saving. These advanced designs provide stable power supply capacity required by the high bandwidth operations in the CPU, and to save power for the entire system as well. “the MSI high-end mainboard comes with “Insist on DrMOS” concept is proved as the best power-saving and overclocking provider from several well-known testing media and end-users, we’ll keep continue to utilize DrMOS into MSI mainboard product to deliver the most leading power design” said Jason Lee, DPS marketing director of MSI. 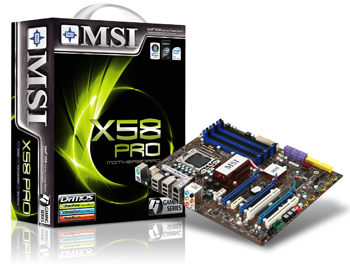 Plug & Play onboard eSATA interface for storage expansion
The X58 Pro, just like other MSI high-end mainboard product, comes with an onboard eSATA 3Gb/s interface to adopts the concept of plug & play storage. It allows users to connect a backup HDD in such an easy way requiring no complex setting and skill from users, leading to not only less accessing time and CPU resource requirements, but also better data transaction signal quality against hard disk failure.

Unlike the other eSATA bracket solution, X58 Pro is designed with onboard eSATA on rear I/O to give the direct link to extra storage chip and Intel chipset, provide the best compatibility with external storage device and stable quality when time goes by.