The HDDP structure is composed of horizontally striped RGB color sub-pixels; each pixel consists of three sub-pixels that are striped horizontally and split in half lengthwise. As a result, horizontal resolution is double that of 3D LCD modules constructed with vertically striped pixels, and 3D images are produced through data for the right eye and data for the left eye being alternately displayed horizontally by pixel. Moreover, 2D images may also be displayed when the same data is presented for adjacent pixels. Since the LCD module can display both 3D and 2D images at the same resolution, it can display a mixture of 2D and 3D images simultaneously on the same screen without causing discomfort to viewers. Furthermore, high-quality images are ensured through optimization that has reduced 3D crosstalk and produces a wide visible 3D area. 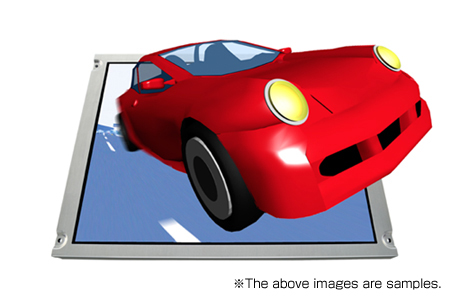 Recently, 3D-based media content has been gaining popularity. In the United States, the number of 3D cinemas and games has been increasing, and 3D broadcasting in Japan was launched in December 2007. Meanwhile, the demand for 3D images has been growing for a variety of applications, such as amusement equipment, digital signage and industrial CAD, medical image analysis and other equipment. As a result, the demand for hardware that can display high-quality 3D images has increased rapidly.

The new LCD module is a result of NEC LCD Technologies’ research and development efforts to produce higher 3D image quality that complements the 2.5-inch 3D LCD module with HDDP structure that was developed by NEC Central Research Laboratories. The new module corresponds to the size and resolution (i.e. 12.1-inch SVGA), which are currently in high demand throughout the industrial market.

NEC LCD Technologies continues to promote research and development of 3D displays, and aims to start production in fiscal year 2009 in addition to the development of new applications for the company’s primary markets.