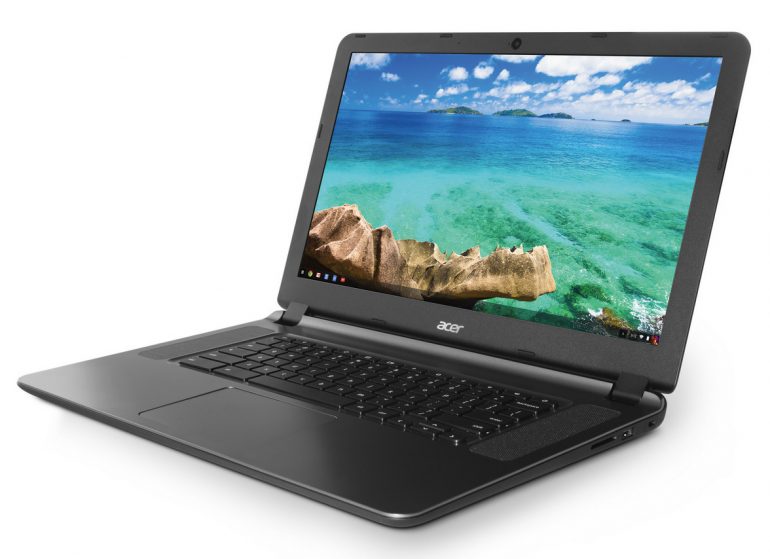 Just a few weeks after launching the C910 Chromebook, Acer has added a new such product to its Chromebook line. The new model is called Acer CB3-531 and comes with a really friendly price without missing out on important features.

The new CB3-531 model comes with a large 15.6-inch LED-backlit TFT LCD display at 1366 x 768 pixels that will ease users who like to work with many programs at the same time. The display also offers Acer’s own ComfyView technology that adds anti-glare properties to the display in order to minimize the amount of reflecting light and thus reduce eye fatigue and strain. A built-in web camera with support for HDR is integrated in the display and two full-sized upwards-facing built-in speakers provide great audio clarity and strong volume.

“Our Acer Chromebook line has been pleasing customers and winning awards since we introduced the first model in 2011,” said Jerry Kao, president of Acer Notebook Business Group. “The new model is a homerun for an important segment in the market – people who want a large 15.6-inch display Chromebook and long battery life at a price that fits in a limited budget. The capabilities and ease-of-use of the Acer Chromebook 15 CB3-531 make it a great choice for families, seniors, and anyone who wants to enjoy the many benefits of Chrome on a large display.”

Inside the Acer Chromebook CB3-531 provides a dual-core Intel Celeron N2830 processor with integrated Intel HD graphics, 16 GB of eMMC internal memory and 2 GB of DDR3 SDRAM. Networking is provided as well – the CB3-531 provides the latest 802.11ac Wi-Fi standard and a number of other connectivity options such as Bluetooth 4.0, a USB 3.0 port, a USB 2.0 port and a HDMI port. There’s a SD/SDXC memory card slot too that can be used to expand the provided 16 GB of internal memory; the slot supports cards with capacities of up to 128 GB.

The Acer Chromebook CB3-531 has three features that may attract more people to the model compared to other Chromebooks – Acer’s creation has a battery that can provide up to 11.5 hours of battery life, which is exceptional for a Chromebook. In addition users will be able to enjoy the largest touchpad ever seen in a Chromebook and finally the CB3-531 is housed in an extra sturdy chassis that can withstand up to 60 kg of force, while the corners have been enhanced to tolerate up to 45 cm (1.5 feet) drops with no damage. Speaking of the chassis, the CB3-531 measures 383 x 256 x 24.2 mm W x D x H (15.08 x 10.08 x 0.95 inches) and weighs 2.0 kilograms.

LG will be the first to introduce broadband HDTVs with the instant-access HD movie service from VUDU Inc.

The new Chromebook will be available in Europe, Africa and the Middle East in June of this year for EUR 249, while customers in North America will be able to get the device in July for a friendlier price of USD 199.99.