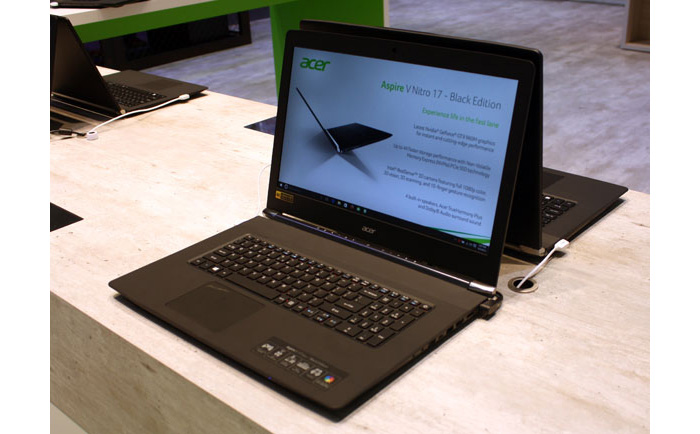 With Intel’s Skylake processor on the market Acer has announced an update to its V15 Nitro and V17 Nitro gaming notebooks that includes the latest mobile Intel Skylake processors. But this is not everything – the new notebooks now come with an aluminum top cover, made by using nanotechnologies and a new full range of cutting-edge connectivity solutions.

Next to the new Intel Skylake processors the new V15 and V17 Nitro notebooks come with support for up to 32 GB of DDR4 memory, GeForce GTX 960M graphics cards with 4 GB of VRAM (Black Edition models only), SATA 3.0 SSD/SSHD/HDDs and fast PCIe SSD NVMe, which is typically found only in enterprise servers. There’s also Acer TrueHarmony Plus and Dolby Audio and they help the four built-in speakers to spread powerful surround sound for games, music and movies. In addition the premium Black Edition models now have a particular bar lighted along the zipper, 4K 100 per cent Adobe RGB and Acer DustDefender heat sinks that are assembled by hand and that come with the world’s thinnest and strongest 0.1 mm thick metal plates.

The connectivity options have been improved as well – the updated versions of the Aspire V Nitro come with support for Thunderbolt 3, which uses Thunderbolt via the USB Type-C at speeds up to 40 Gbps and 802.11ac Wi-Fi by Qualcomm as standard with MU|EFX MU-MIMO technology, which makes downloading up to three times faster than other products with 802.11ac technology. MU-MIMO networks are also able to manage multiple devices simultaneously in order to ensure greater efficiency with multiple devices.

“Consumers are more sophisticated look for your notebook more powerful and efficient for applications such as games, streaming video 4k, download and more,” said Rahul Patel, senior vice president and general manager of Qualcomm Connectivity Technologies, Inc. “With the inclusion of technology for Qualcomm MU-MIMO, the series Acer V Nitro has an excellent Wi-Fi connectivity that provides the best performance.”

The new Acer Aspire V17 Nitro notebook will be available in EMEA from mid-September with prices starting at EUR 1299, while the smaller 15-inch V15 Nitro will start at EUR 999.