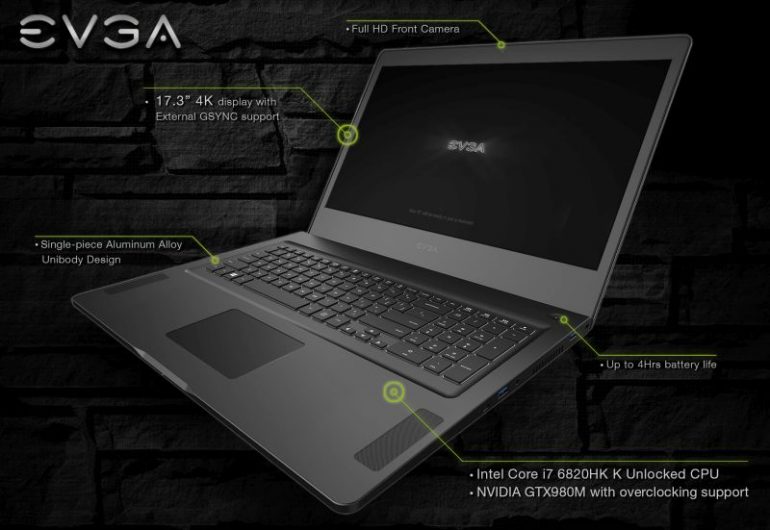 EVGA has entered the gaming notebook market with a storm by announcing the all-new SC17 gaming notebook. According to EVGA the notebook has been designed from the ground up by EVGA specialists and as expected the SC17 comes packed with powerful hardware. Moreover this hardware has been overclocked right at the factory.

The SC17, presented at CES 2016, comes with a 17.3-inch display that works at 4K resolution (3840 x 2160 pixels) and that supports G-Sync technology. EVGA points out that this is the world’s first notebook with such a display. Inside the SC17 gets powered by an unlocked Intel Core i7-6820HK Skylake processor with four cores that work at 2.70 GHz. The Turbo speed of this chip is 3.60 GHz but EVGA has increased it to 3.80 GHz. The SC17 also packs an NVIDIA GeForce GTX 980M video card that is factory-overclocked. The GPU here runs at 1200 MHz, while the 16 GB of DDR4-2133 memory by G.Skill has been overclocked to 2667 MHz.

The SC17 uses two Samsung M.2 solid-state drives that offer 256 GB of storage space and a 2 TB hard drive. The machine also has a USB 3.1 Type-C port, two USB 3.0 ports as well as HDMI 1.4a and two miniDP ports. Finally the SC17 has a battery that can power all this hardware for up to 4 hours. The entire computer is just 25.6 mm thick and weighs 3.86 kilograms, which is understandable.

The new EVGA SC17 gaming notebook will be available later in 2016. The price of the notebook is unknown but as you know – all this hardware is very expensive so the price of the SC17 will not be low for sure.