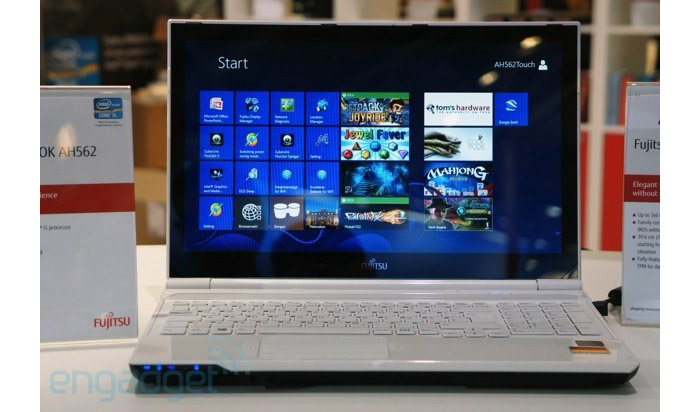 The Japanese tech company Fujitsu has taken the opportunity to unveil the budget-oriented LifeBook AH562 notebook at the on-going CeBIT 2013 in Hannover, Germany. A peculiarity of the device is that it gets manufactured in Germany and sports a German flag near the keyboard which confirms its origin and guarantees traditional German quality.

The Fujitsu LifeBook AH562 is based on an Intel Core i5 Ivy Bridge processor at 2.65 GHz and relies on the built-in Intel HD 4000 graphics for its graphics needs. The notebook has a 15.6-inch sensor display that works at 1366 x 768 pixels and comes with an integrated optical drive, a SD/MMC card reader, Bluetooth, Wi-Fi and Gigabit Ethernet for networking, HDMI and D-Sub outputs, three USB 3.0 ports and one USB 2.0 port as well as jacks for a microphone and speakers. As expected the LifeBook AH562 runs Windows 8.

Fujitsu aims the LifeBook AH562 at small businesses, which would like to replace their desktop machines with notebooks. The expected pricing hovers around EUR 699 although this has to be confirmed. The release date is still unknown, though.