This fully rugged notebook can take all sorts of abuse, assuming you can afford it.

Designed to withstand the military standards for durability, the Getac B300 won’t blow you away with speed, but it’s as tough as they come and offers the features fieldworkers are looking for, including an excellent daylight-readable touch screen and a built-in GPS radio. You’ll have to dig deep to afford its $5,534 price tag, though. 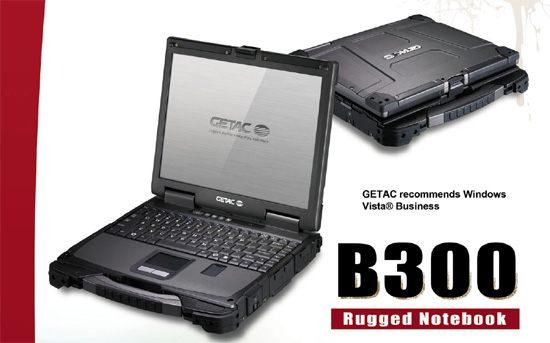 One glance at Getac’s B300 tells you this is no ordinary notebook. Similar in design to Panasonic’s industrialized ToughBook 30, the gray and black B300 uses a magnesium alloy chassis and rubber corner guards to protect its interior components and the 13.3-inch display. It also has a sturdy snap-in handle, reinforced hinges, and a heavy-duty latch to prevent the lid from opening accidentally. The system is 2.4 inches thick and, at 7.7 pounds, significantly lighter than the 8.4-pound ToughBook 30. 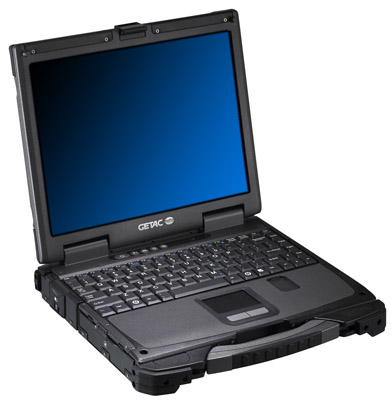 The 1024 x 768-pixel resolution display is crisp and brightly lit with nice, wide viewing angles. The screen was easy to read both indoors and out, and we had no trouble reading it in direct sunlight, thanks to the Sunlight button that boosts the brightness level from 500 to 1200 nits to compensate for extreme ambient light and glare. 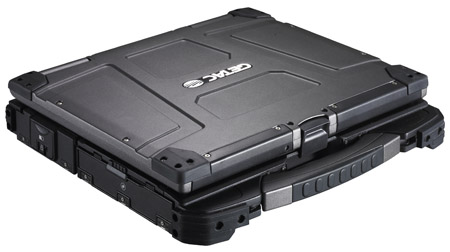 On the other hand, the keyboard, which is covered in a rubber membrane to prevent water intrusion, feels squishy and too soft, but it sports a nice red backlighting to illuminate the keys. The small touchpad and mouse buttons are responsive and comfortably positioned in the center of the keyboard deck. Above the keyboard are a power button, a programmable hot key, and three preset hot keys: The Eco button lets you enter a power-saving mode that reduces the screen’s backlighting and cuts back the CPU speed to extend battery life; the Sunlight button increases the screen’s brightness level for viewing in direct sunlight; and the Light Sensor button adjusts the screen’s brightness based on ambient lighting conditions.

On the left side of the Getac B300 are a DVD burner and a battery compartment, both of which are hidden behind water-resistant doors. On the right are four more sealed compartments, the first of which houses a removable 120GB hard drive. Behind the next door are two PC Card slots (which can be replaced wtih ExpressCard slots) and two USB ports, while the third compartment contains two audio jacks, a 4-in-1 card reader, a FireWire port, a Wi-Fi switch, and an external GPS antenna jack. Ethernet and modem ports occupy the forth compartment. Around back are the power jack, two serial ports, a VGA output, and a docking station connector, all of which are protected by sealed panels. 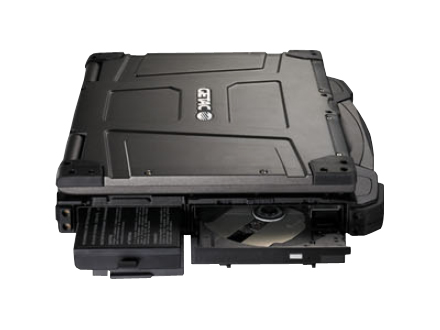 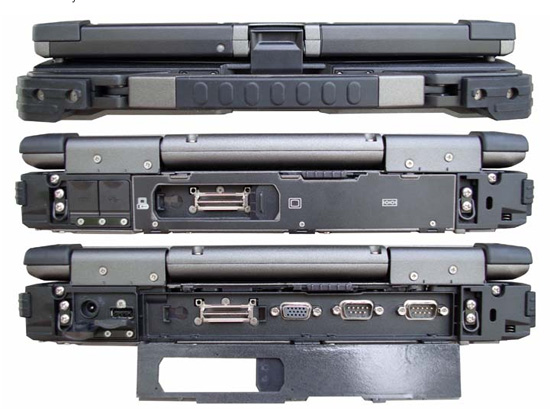 The B300 is built to meet or exceed the U.S. military specifications (MIL-STD-810F) for shock, drop, vibration, temperature, humidity, and altitude. It also meets the international Ingress Protection (IP-54) standard for dust and water intrusion. In addition to its tough exterior casing, the system features a shock-mounted, 120GB hard drive and sealed port and I/O connectors. The B300 isn’t waterproof, but it can withstand dripped, splashed, and sprayed water from all directions. Our model also came with an optional Salt Fog anticorrosion coating that protects the chassis and other metal parts from damaging salt erosion.

We subjected the B300 to a small battery of durability tests to see if it was indeed as tough as it looks. After dropping the system onto a carpeted office floor from a height of 36 inches, it powered up without any trouble. We repeated the drop test for a total of three times, making sure to hit a different edge each time, and we got the same result; the B300 sustained no internal or external damage and fired right up after each drop. 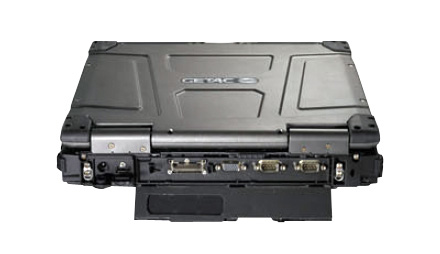 To test water resistance we poured an ounce of water directly onto the center of the keyboard and then gave it a quick wipe-down. We did this three times, making sure to douse a different area of the keyboard deck each time. The system started up without a hitch after each soaking and exhibited no apparent signs of water damage.

Security options include a biometric fingerprint reader, which is protected by a water-resistant panel, and TPM circuitry, which is bundled with Infineon’s TPM Professional software. A SmartCard reader is available as a $160 option.

With its 1.6-GHz Intel Core 2 Duo L7500 processor and 2GB of RAM, the B300 performed pretty much as we expected. The notebook did manage to outperform the similarly configured Toughbook but not by much. On our PCMark05 test (which measures application performance under Windows XP) the B300 scored 3,409, while the Toughbook turned in a score of 3,284.

The B300 also trumped the Toughbook on our 3DMark03 (which tests DirectX 9 performance) and 3DMark06 (which tests DirectX 9 3D graphics, CPU, and 3D features) tests, turning in scores of 1,585 and 550, respectively. These results are more in line with netbook averages than with traditional notebooks. The bottom line: this system, with its Intel GMA X3100 graphics controller, is not cut out for 3D gaming.

It took the B300 only 45 seconds to boot into Windows XP, but its score of 15.7 MBps on the LAPTOP Transfer Test was on the slow side—about 1 MBps slower than the mainstream average.

In addition to Bluetooth wireless, our B300 was equipped with a GPS radio and an integrated WiFi Link 4965AGN adapter. Wireless performance was nearly identical to that of the Toughbook, turning in data rates of 20.7 Mbps at 15 feet from our access point and 18.5 Mbps at 50 feet. The GPS radio quickly acquired a 3D fix (minimum of four satellites locked) in only 45 seconds. Getac also offers EV-DO (Sprint and Verizon Wireless) and HSDPA (AT&T) mobile broadband options with this model.

The B300 gave us 5 hours and 46 minutes of battery life on the LAPTOP Battery Test (continuous Web surfing over Wi-Fi), which is quite good when compared to most mainstream notebooks but more than an hour short of the Toughbook’s battery score. In the event that you do manage to damage the notebook, it comes with a three-year standard limited warranty.

The Getac B300 isn’t geared toward the typical consumer, most of who will balk at its hefty price tag. It instead is designed with military and field service personnel in mind, including EMS, public safety, and utility workers who spend much of their time outdoors and exposed to the elements. Even then, though, it’s still $800 more expensive than the Panasonic Toughbook 30, which offers slightly lesser performance but a longer battery life and better keyboard. Still, if durability is paramount, the B300 is a very good rugged machine. 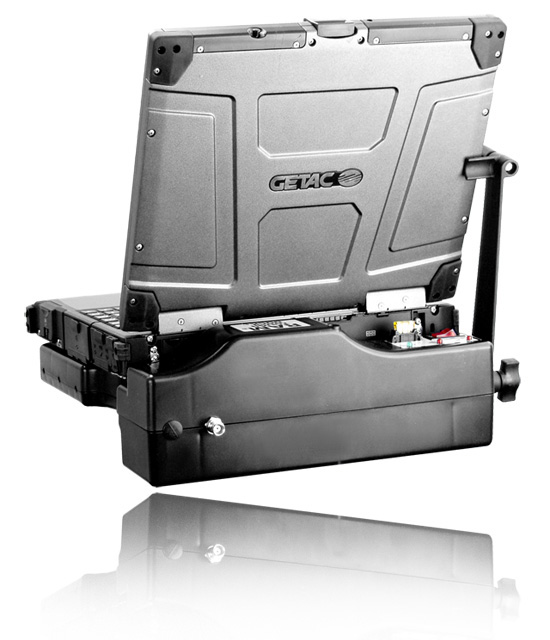 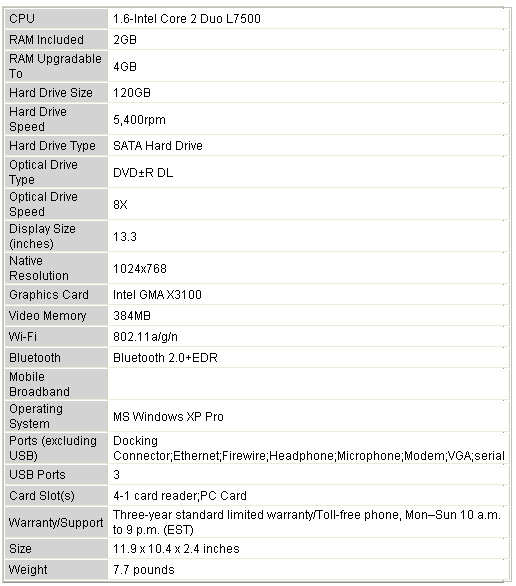