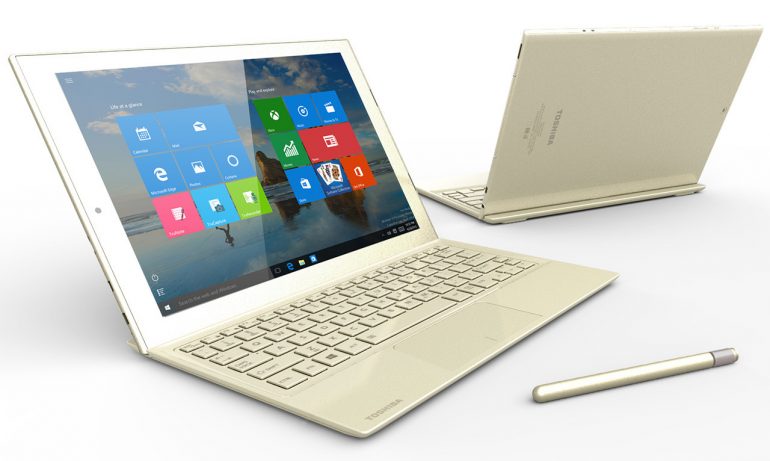 Toshiba has pleased fans around the world with the introduction of a new convertible notebook that is called dynaPad. The device can also be used as a tablet and is designed to run Windows 10 from the ground up.

Toshiba claims the new dynaPad is the world’s thinnest and lightest 12-inch Windows tablet. This might as well be true since the dynaPad is just 6.9 mm (0.27 inches) thick and weighs only 567 grams (1.25 pounds). This makes the dynaPad very easy to take anywhere so the notebook can also serve people who are constantly on the go. In addition the dynaPad package includes a high-precision pen and an optional ultra-thin keyboard dock that make working with it even easier.

“This tablet is designed to enable everyone to quickly capture information, effectively organize ideas and better express themselves,” said Philip Osako, senior director of product marketing, Toshiba America Information Systems, Inc., Digital Products Division. “Combining an ultra-thin, pen-capable tablet with Toshiba’s suite of productivity applications plus the versatility of Windows 10, we are closer to achieving the vision: truly personal computers that act as a complete medium for learning and expression.”

The Toshiba dynaPad is housed in a highly rigid monocoque carbon chassis that comes with a rubberized Satin Gold finish. The optional ultra-thin full-sized keyboard comes with a 19 mm pitch and 1.5 mm stroke for easier typing. The keyboard can be attached to the display via magnets so you can use the dynaPad as a notebook or as a tablet – it is up to you. The device uses a 12-inch WUXGA+ IPS display at 1920 x 1080 pixels that delivers sharp details and wide viewing angles for all types of work. In addition, the device includes a dual-layer anti-reflection and anti-fingerprint coating that maintains the screen’s sensitivity in bright environments and enables users to easily clean fingerprints.

The Toshiba dynaPad is powered by an Intel Atom processor at 1.44 GHz and offers 4 GB of RAM memory. Unfortunately there’s no information on the amount of storage memory inside the dynaPad. The convertible notebook will be in stores in Q1 2016 and it will sell for USD 1080 with no sales tax included.