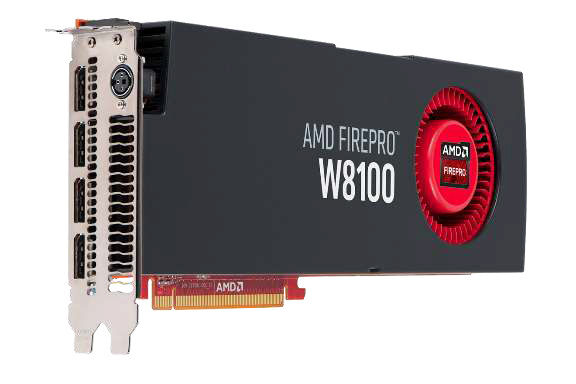 AMD has officially announced its latest graphics adapter aimed at professionals who use workstations. The new company product is called FirePro W8100 and is best used in CAD applications for 4K resolutions, media content, engineering software and demanding applications.

The FirePro W8100 is based on a 28 nm Hawaii Pro graphics chip that offers 2560 stream processors on GCN architecture, 160 texture units and 64 ROP units. The card itself comes with 8 GB of GDDR5 memory on a 512-bit bus. The chip runs at 824 MHz, while the memory operates at 5000 MHz. These impressive hardware specs allow the FirePro W8100 to reach 4.2 TFLOPS of single-precision power and 2.1 TFLOPS of double-precision power.

There are requirements to get all this power – the AMD FirePro W8100 needs 220W of power and two 6-pin PCI-E Power cables. A dual-fan system provides cooling and there are four DisplayPort and one 3-pin Mini-DIN ports on the back of the card.

The new AMD product will be commercially available in early July 2014. It can be yours for USD 3999.