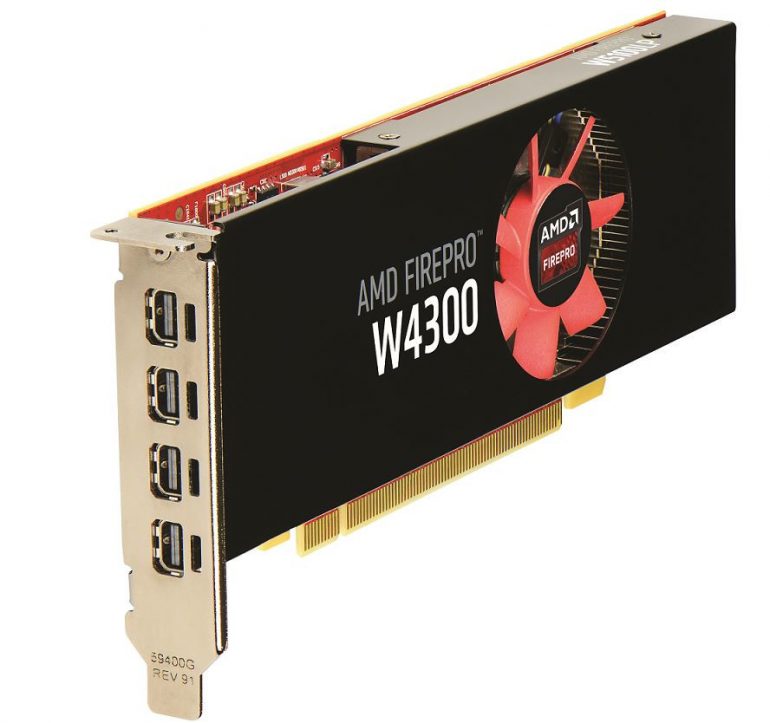 AMD usually makes headlines with its new Radeon graphics cards but this time the case is different – the US chip maker has announced one more FirePro professional graphics card called FirePro W4300. Unlike other FirePro models, this one is budget-oriented and is designed for use in entry-level workstations or by people who do not need that much computational power, yet they work with professional content.

“We designed the AMD FirePro W4300 specifically for CAD,” said Sean Burke, corporate vice president and general manager, Radeon Technologies Group, AMD. “CAD users rely on AMD FirePro graphics cards to enable their application features to best visualize their designs, and now can continue to do so without having to compromise by using the latest energy efficient, small form factor workstations.”

The new FirePro W4300 is a low-profile version of the FirePro W5100 video card – both products are based on the same Bonaire GPU, which runs at 930 MHz and features 768 stream processors. Just like the FirePro W5100, the new card comes with 4 GB of GDDR5 memory at 6000 MHz effective clock speed and a 128-bit memory bus. The only difference is that the W5100 needs 50 watts of power, while the W4300 requires just 25 watts.

The new FirePro W4300 offers support for the AMD Eyefinity multi-display technology, which allows the use of up to six ultra-high resolution displays, OpenCL 2.0, AMD PowerTune and ZeroCore technologies for lower power consumption and has four DisplayPort 1.2a connectors with support for up to six DisplayPort monitors via a MST-enabled hub. The card is AMD’s most powerful low-profile professional video card and is best used in systems, which deal with automatic design programs. The card will sell for USD 379 when it becomes available in early 2016.