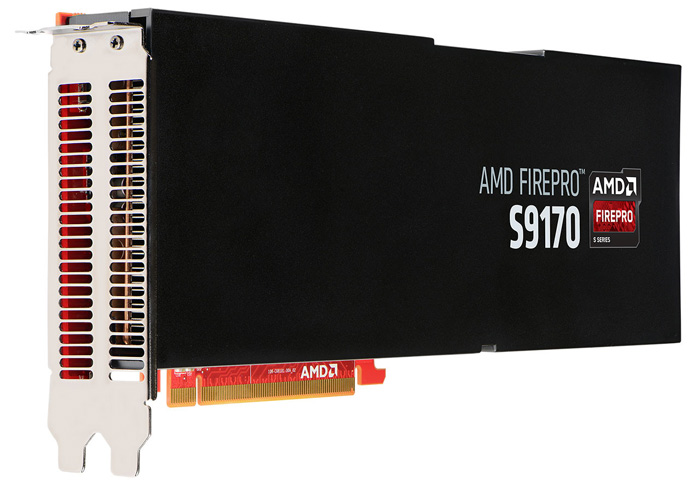 AMD has officially announced the new AMD FirePro S9170 server video card, which is the world’s first and fastest single-GPU video card that is designed for heavy double-precision workloads. Another major perk of the new FirePro S9170 is that is comes with 32 GB of VRAM, which is simply awesome.

“There are some HPC workloads which require as much data as possible to stay resident on the device, and so the 32 GB of memory provided by AMD FirePro S9170, the largest available on a single GPU, will enable the acceleration of scientific calculations that were previously impossible,” said Simon McIntosh-Smith, head of the Microelectronics Research Group at the University of Bristol. “For example, our new OpenCL version of the SNAP transport code from Los Alamos National Laboratory needs to keep as much data resident on the device as possible, and so the 32 GB of memory will let us run problems of a much more interesting size faster than ever before. The large memory, combined with the 320 GB/s memory bandwidth and double precision floating point performance, will make the AMD FirePro S9170 server GPU a ‘killer’ solution device for many HPC applications.”

The new AMD FirePro S9170 comes with 32 GB of GDDR5 memory, which is serviced by a 512-bit memory bus for total memory bandwidth of 320 GB/sec. This makes the card offer 33 per cent more memory than competitive GPUs in the same range. The card will be commercially available in Q3 2015. No word on pricing as of now.