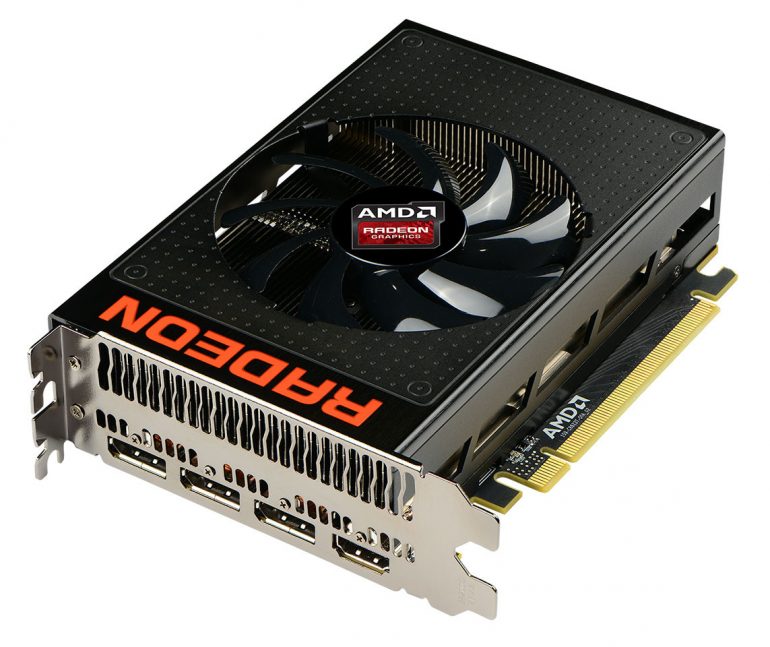 AMD has announced the rumored Radeon R9 Nano video card at an event held in the USA. The new Radeon R9 Nano graphics card is the fastest mini-ITX video card in the world that makes it possible to enjoy 4K gaming in ultra-compact gaming PCs while at the same time requiring little power and emitting less heat that competing solutions.

As expected before the just 6-inch long Radeon R9 Nano is based on the same Fiji GPU, found in the liquid-cooled Radeon R9 Fury X graphics card, which means it arrives with 4096 stream processors on board as well as 256 TMUs and 64 ROPs. The card has 4 GB of HBM memory over a 4096-bit bus. The memory runs at 500 MHz and thanks to the wide bus can provide 512 GB/sec of data to the core. It is unclear what clock speed the GPU runs at but the top speed is 1000 MHz, which makes us think that in 2D and under light loads the Fiji GPU operates at very low clock speeds. The Radeon R9 Nano comes with TDP of 175 watts, which makes it require 30 per cent lower power that the previous generation Radeon R9 290X video card, while offering 30 per cent more performance. All this hardware is cooled by a simple air cooler with low noise levels. As to connectors in the back the Radeon R9 Nano has three DisplayPort connectors and one HDMI port.

“With the Radeon R9 Nano graphics card, AMD is enabling 4K class gaming in your living room in an exceptionally quiet, ultra-small design built to excel in today’s games and on the latest APIs like DirectX 12 and Vulkan. There simply is nothing else like it,” said Matt Skynner, corporate VP and general manager, Product, Computing and Graphics Business Unit at AMD. “Our Radeon graphics line-up is ushering in a new era of PC gaming delivering remarkable performance, unmatched GPU designs and groundbreaking technologies. Today is a revolutionary moment for PC gaming, and we are proud to add this distinct product to our well-rounded AMD Radeon R9 graphics lineup.”