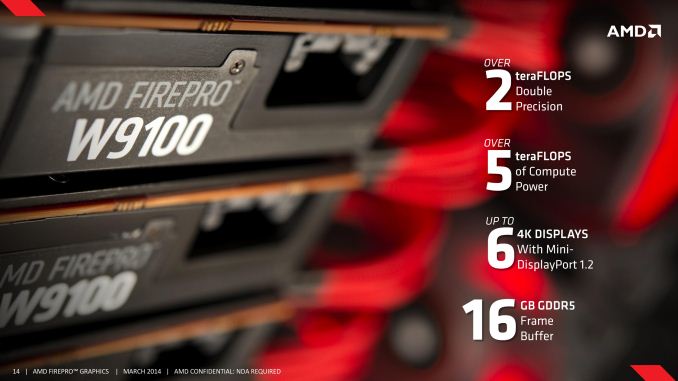 AMD has come up with a new professional graphics card that goes by the brand name of FirePro W9100. The main goal of the newcomer is to deliver better performance and finally retire the previous FirePro W9000 generation.

The FirePro W9100 is based on a Hawaii generation GPU and reaches 5 TFLOPS of single precision power; in the double precision dimension the card reaches 2.76 TFLOPS. The Hawaii chip inside comes with 2816 stream processors, split in 44 computational cores and makes use of full 16 GB of GDDR5 memory. Unfortunately AMD did not provide any information on clock speeds but as a small consolation the card can be simultaneously connected to as many as six 4K monitors.

The arrival of the FirePro W9100 brings a new AMD initiative too. The US company has presented a new standard known as Ultra Workstation. Partners of the US chip maker will offer various pre-built systems that will be capable of performing various tasks. In order to meet the Ultra Workstation requirements you must have a processor with 8 computational cores, 32 GB of RAM and one FirePro W9100 graphics card.

As to the response to the recently announced dual-GPU GeForce GTX Titan Z AMD is expected to debut a new dual-GPU card by the end of the week so stay tuned to our web site for more information!