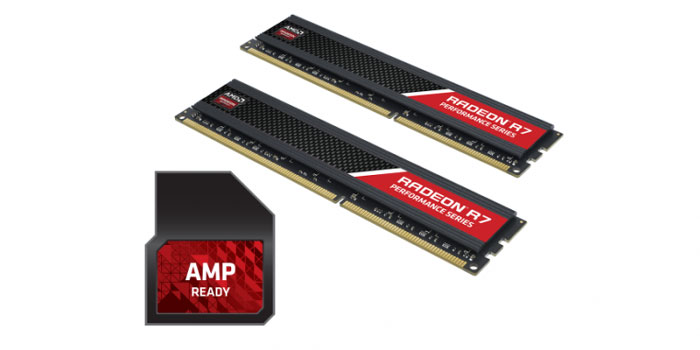 A few years ago AMD started selling RAM memory sticks under its own brand name. The memory covered the DDR3 memory standard and actually worked pretty well being made by the US manufacturer Patriot Memory.

Now with DDR4 getting more and more popular AMD has quite logically presented the first DDR4 memory sticks under the AMD brand name. The funny thing is that the latest DDR4 memory can now only be used in Intel systems, powered by Haswell-E and Skylake processors. But if you can make some more money, then why not do it? This is exactly what AMD is trying to do now.

The new AMD DDR4 memory belongs to AMD’s “Performance Series R7” and offers two capacities of 4 GB and 8 GB. There are two speed options as well – 2133 MHz and 2400 MHz and you can also get this new memory in 8 GB and 16 GB dual-channel kits. The memory runs at CAS latency values of 15 clocks and AMD even says the new memory can be overclocked up to 20 per cent in the case of DDR4-2400 but if you do not want to waste time you can take advantage of the implemented AMD Memory Profiles (AMP), saved in the memory, which happen to be exact copies of Intel’s XMP.

AMD plans to launch its DDR4 memory platforms in about a year. The first platform to offer DDR4 will be Bristol Ridge, which will later be followed by the highly expected Zen CPU generation.