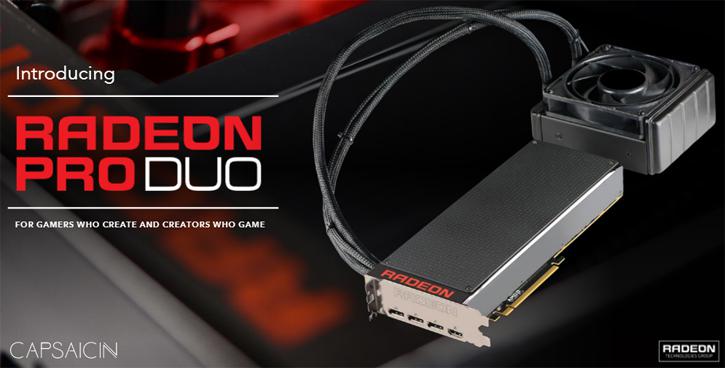 AMD has unveiled the highly expected dual-GPU Fiji video card at the on-going Capsaicin event. The official name of the card is Radeon Pro Duo, which is something new because back in the past the card was expected under the Radeon Fury X2 or Radeon Gemini brand names but as you can see this is no longer the case.

So the new Radeon Pro Duo video card comes with two Fiji GPUs onto the same PCB. The chips feature 4096 stream processors each for a total of 8192 stream processors as well as 2 x 256 texture units, 2 x 64 ROPs, 2 x 4 GB of HBM memory, and 2 x 4096-bit memory buses. The GPUs run at around 1000 MHz, which gives AMD the right to claim Radeon Pro Duo has 16 TFLOPs of computational power and 51 per cent more performance than the GeForce GTX Titan Z. In the back the card has three DisplayPort 1.2a connectors and one HDMI 1.4a connector.

In any case the Radeon Pro Duo graphics card is a monster when it comes to 3D computations. AMD says this is the world’s fastest graphics card so after all the price that sits behind it may be worth it.