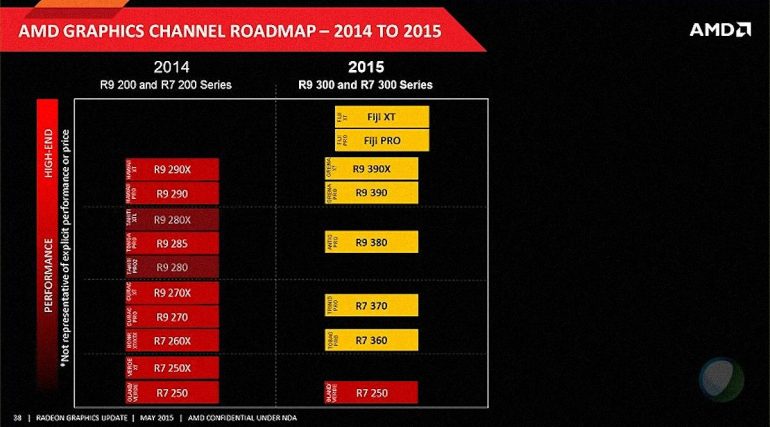 We have discussed AMD’s upcoming video cards far and wide in the recent weeks but there’s always a new piece of news, which surrounds AMD’s new hardware that is just around the corner. This time we will be dealing with AMD’s 2015 GPU roadmap, which was just leaked. Since the roadmap covers an entire year, it definitely deserves a word.

The upcoming Radeon R9 380 will be powered by the same previous generation Tonga GPU, which in this case will be called Antigua. The R9 380 will likely come with 4 GB of on-board memory and will compete with the GeForce GTX 960.

Moving down the ladder we will see that the Radeon R7 370 will be driven by the so-called Trinidad GPU, which will be a rebranded Curacao GPU, which in turn is the older Pitcairn chip. The memory, when compared to the older generation will be doubled, though, so the R7 370 will have 4 GB of VRAM. The R7 360 will be powered by the Tobago GPU, which is the familiar Bonaire GPU. Finally we will get the R7 250 from the current generation – this one will be taken to the future with no changes.

The Fiji GPU and its two incarnations – Fiji XT and Fiji Pro – will sit on top of all these cards. They both will feature HBM memory and will compete with the GTX 980 Ti/Titan X and the GTX 980, respectively.