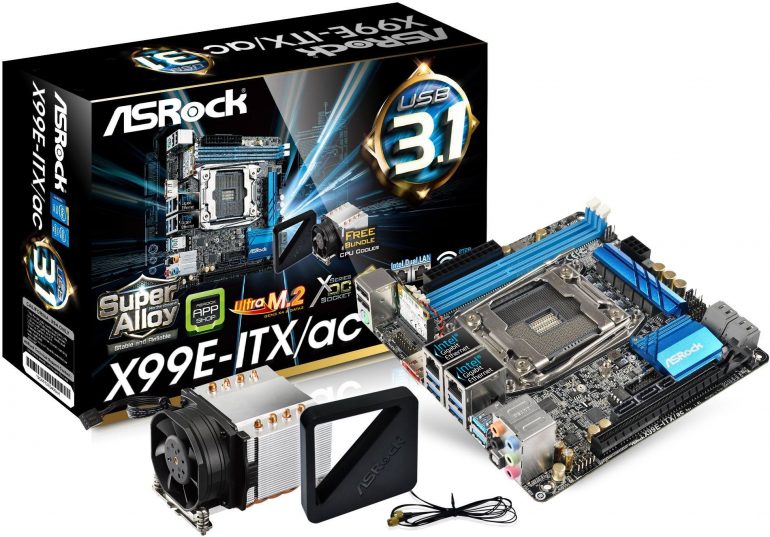 ASRock has been making extremely versatile motherboards for years, where you can use both old and new technology at the same time, but this time the Taiwanese company has bested itself. The famous motherboard maker has created the world’s first mini-ITX motherboard with an Intel LGA 2011-v3 CPU socket, which means you can use the power of DDR4 and Intel Haswell-E processors in small-sized chassis.

The small size of the new motherboard, called ASRock X99E-ITX, calls for some sacrifices, though. The most obvious compromise that you will make can be instantly seen – the motherboard comes with just two DDR4 DIMM slots, which means you will be able to use dual-channeled memory only despite the fact that the platform can use quad-channeled DDR4 SDRAM. In addition the board has one Ultra M.2 (PCIe gen 3.0 x4 physical layer) port, an eSATA 6 Gb/sec port on the rear panel, one 10 Gb/sec SATA-Express port and four other SATA 6 Gb/sec ports. The board also has one PCI-E 3.0 x16 expansion slot, one mPCIe 3.0 x1 slot, 802.11ac Wi-Fi, Bluetooth 4.0, two Gigabit Ethernet interfaces, a 2-port USB 3.1 controller, four other USB 3.0 ports, and an 8-channeled integrated audio solution. Most of the motherboard is occupied by the large LGA 2011-v3 socket and this is the reason why the X99E-ITX offers an unconventional cooler mount. To help users ASRock ships the board with a copper heat pipe-fed aluminum fin heat sink that can cool chips with up to 140W TDP.

The price of the X99E-ITX is unclear as of now.