There seems to be a new trend on the motherboard market – various motherboard makers have started offering motherboards designed specifically for overclocking, possibly creating a new market segment. The latest company to offer an overclock-oriented motherboard is ASRock with its all-new Z77 OC Formula mobo.

The Z77 OC Formula features the new CEB form factor – which makes it a bit taller. The new motherboard also uses high-quality gold-plated polymer Japanese capacitors and as the name suggests is based on the Intel Z77 chipset, which offers support for all Socket LGA1155 based processors.

Other overclock-friendly features include Digi-Power 12+4 phase power design, high-density power connectors and gold contact points for the CPU and the memory. There’s also twin-power cooling, which is in fact both air and liquid cooling for the CPU VRM. The CPU also gets clean power thanks to one 8-pin and one 4-pin EPS connectors. In the BIOS you will also find pre-defined overclocking profiles. 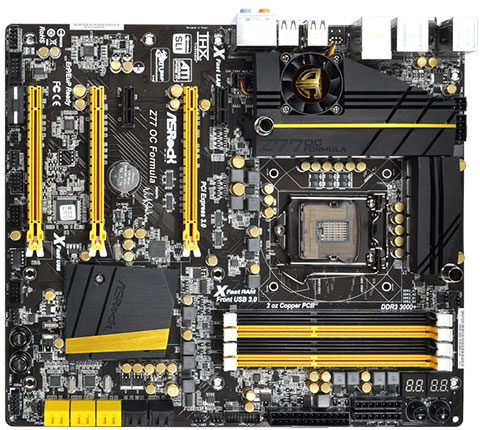 The Z77 OC Formula will become commercially available later this month for a “moderate” price.