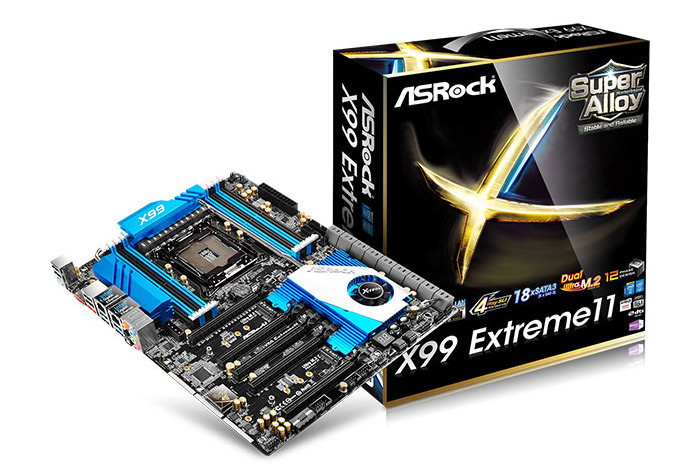 ASRock has been known for years for making some strange but very functional motherboards. In the past few years the Extreme line of the company has become home to numerous unusual but very powerful boards that have nearly everything you may ever need. Now the tradition continues with the new ASRock X99 Extreme11 motherboard, which as the product name suggests, supports the latest Intel Haswell-E processors.

Apart from offering support for the world’s most powerful x86 chip, the ASRock X99 Extreme11 will be remembered for the outrageous number of SATA ports offered: 18! The board is then excellent for people who want to store tons of information on hard drives or SSDs. The ASRock X99 Extreme11 has 10 SATA 3.0 connectors from the Intel X99 chipset and then 8 additional SAS-3 12.0 Gb/sec ports courtesy of the LSI SAS 3008 controller chip. ASRock claims the ASRock X99 Extreme11 was able to achieve 6.1 GB/s data transfer rates when SSDs were connected to the storage ports.

The storage options are not the only strong point of the ASRock X99 Extreme11. The motherboard comes with the world’s fastest Ultra M.2 PCIe Gen3 x4 slots, a luxurious 12 power phase design that allows the motherboard to reach insane speed at lower power consumption and lower temps, unmatched graphics options with 4-way SLI/CrossFireX at x16/x16/x16/x16 speeds and premium hardware components such as 12K platinum caps, aluminum alloy heatsinks, Ultra Dual-N MOSFETs and more.

No word on how much the ASRock X99 Extreme11 costs but premium hardware cannot be cheap.

VIA nnounced the launch of the AMOS-3000 Embedded Box Computer